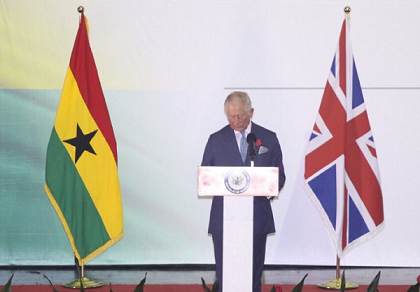 The Prince of Wales, Prince Charles

The Prince of Wales, Prince Charles, says there is alarming evidence that the increasing trend of climate change requires a drastic and concerted effort to halt it or the earth will face the risk of doom for its current and future inhabitants.

He said the resilience of the environment had been substantially undermined by decades of over-exploitation and that the impact of climate and global warming was being felt through disasters by a large number of people in the world.

Prince Charles, who is apparent to the British throne and will assume leadership of the Commonwealth, was delivering a public lecture in Accra yesterday as part of his five-day official visit to Ghana.

The lecture was on the theme: “Towards a Common Future”.

Prince Charles said recent research by scientists had suggested that 1.5 degrees more of global warming would mean catastrophic damage to the eco-system, which sent a clear signal that the people of the world must heed to.

He said the impact of climate change had a multiplier risk that would exacerbate the increasing fragility of the world’s natural habitation.

The Prince of Wales gave a speech talking about the people and the sustainable social enterprises he has met on the visit to Ghana. pic.twitter.com/HwW7FzxqTt

Prince Charles said the impact of climate change and global warming were being felt by too many Commonwealth citizens through hurricanes and cyclones, especially the island states of Dominica, Barbuda, the British Virgin Islands and Africa.

He said erratic weather patterns posed a threat to food security that would lead to the mass migration of millions of people from their places.

Citing the example of Lake Chad, which he said had reduced to one-tenth of what it used to be decades ago, Prince Charles said the shrinking of the lake, coupled with the devastating spread of the Sahara Desert, was displacing whole populations and fueling bitter conflict which was being replicated around the world.

The Prince called on member states of the Commonwealth to share best practices and coordinate their responses to those kinds of disasters.

He said Australia, where national critical care and trauma response centres had been established to deploy medical teams and facilities in rapid response to disasters overseas, offered a compelling example of a source of coordinated response which should be replicated in the Commonwealth to offer assistance to those affected by disasters.

He said eight million tonnes of plastic entered the sea annually and that very soon it would be one tonne of plastic for every three tonnes of fish in the sea, a situation which would increase the death zones in the oceans.

To address the challenge, the Prince of Wales suggested that there should be drastic ways of conserving the ocean and developing a sustainable circular approach to the blue so that ecosystems would be protected to generate new jobs and stimulate economic growth.

Prince Charles singled out Ghana and said it had the propensity to play a vital role by leading the way in Africa and the Commonwealth and commended Ghana for joining the High-Level Panel of Sustainable Blue Ocean Economy.

He said although there was the need to prepare for climate-induced disasters in such manner, it was incumbent on all to work at the same time to tackle the underlying causes by establishing a proper price for carbon and address the global problem of perverse subsidy regime and the continuing lack of the polluter-pays principle.

Prince Charles called for the creation of a circular economy which would lead to designing products, so that little or nothing would be wasted in recycling and putting in place the planning system, infrastructure and incentives to minimise the environmental impact.

Prince Charles touched on the slave trade and publicly admitted that the appalling atrocities of the slave trade and the unimaginable suffering it caused had left an indelible stain on the history of the world and should not be allowed to resurface in any form.

He added that while Britain could boast of leading the way for the abolition of those shameful happenings, it had a shared responsibility to ensure that the abject horror of the slave trade was never forgotten and the need to deal with the existence of modern slavery and human trafficking.