We must review tax agreements — Report 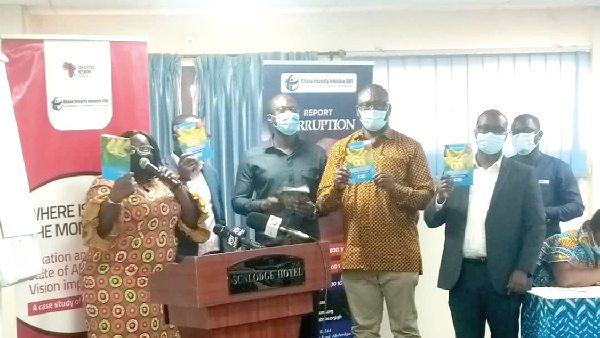 Mrs Linda Ofori-Kwafo (left), Executive Director of the Ghana Integrity Initiative, and some officials of the organisation launching the report Follow @Graphicgh

A research report has recommended that the country conduct extensive review and renegotiation of the double tax agreements (DTAs) or tax treaties it has been implementing.

It said the review was necessary to determine whether the country was actually benefiting from the existence of the bilateral DTAs or not.

It further recommended that the country develop a comprehensive plan to build the capacity of people who negotiated tax treaties on its behalf.

The study, which was carried out between 2010 and 2015, was on “Dangers of Double Tax Agreements (DTAs) in financing development in Africa: Case study of Ghana”.

It sought to analyse the dangers that DTAs posed to financing development in African countries.

At the launch of the report, organised by the Ghana Integrity Initiative (GII), in Accra, a tax consultant, Mr William Kofi Owusu Demitia, said the study further found out that there were disparities between the tax rate in Ghana's domestic existing laws, according to the Income Tax Act, and the rates in the DTAs.

According to him, some provisions in the DTAs were skewed in favour of Ghana's treaty partners, instead of the intended mutually beneficial tax revenue sharing relationship.

Mr Demitia, who is also a lecturer at the University of Ghana Law School, said, for instance, that in accordance with the provisions on dividends in the DTA between Ghana and South Africa, South African companies which held at least 10 per cent capital in a Ghanaian company were only liable to pay five per cent tax on the dividends they received from such companies within the period 2010 to 2015, instead of the eight per cent tax rate contained in Act 592.

He said the criteria for selecting people to join the team of negotiators should be transparent, so that the team could be made up of experts representing stakeholders from both the public and the private sectors.

"Ghana has a model DTA, a blueprint that we submit when we are negotiating. There is the need for us to look at it, design it and update it, so that we will be able to make it responsive to the current needs," Mr Demitia added.

The Head of Finance and Lead of Tax Project at the GII, Mr Benedict Doh, said Ghana had about 11 DTAs which, he suggested, must be aligned to the UN model for negotiation, since the model of the Organisation for Economic Cooperation and Development (OECD) did not favour developing countries.

"We have a tall list of pending DTAs. Ghana must critically assess them as to whether we are benefiting from them or there is the need to sign new ones.

"We have seen countries that could be described as tax havens having DTAs with Ghana, which means that the tax revenue that goes to those states will be at a very marginal or even no rate, which does not inure to the benefit of the country," he said

Mr Doh said the objective of the report was to assist the government broaden its tax base, adding that the GII would engage the Ministry of Finance and the Ghana Revenue Authority to work on the recommendations.

The Executive Director of the GII, Mrs Linda Ofori-Kwafo, said efforts by African countries to be self-reliant to finance their own development had been full of challenges, ranging from issues of tax evasion, tax avoidance to base erosion and profit shifting (BEPS).

"As of December 2020, Ghana’s debt-to-GDP ratio stood at 76.1 per cent, and this situation has resulted in very high and unsustainable interest payments which have led to the usage of scarcely mobilised tax revenue for servicing the debts, thereby denying the state the much-needed resources for development," she said.