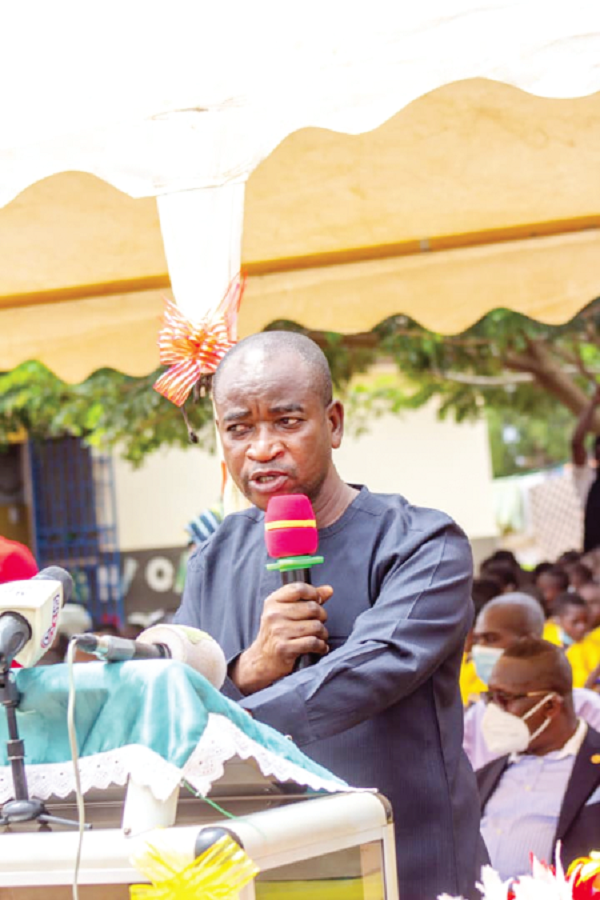 The Member of Parliament for Kpone-Katamanso constituency in the Greater Accra Region, Mr Joseph Tettey, says his outfit is in talks with revelants stakeholders, including, the law enforcement agencies and the Kpone-Katamanso Municipal  Assembly to deal with people who have adopted illegal mechanisms to sell lands earmarked for development at Appolonia Town.

He said it would be a dent on his reputation and office to watch people use illegal means to sell lands allocated for community development purpose.

" I will not sit down and watch with my hands folded in between my thigh while some selfish indigenes of Appolonia town go around to sell lands earmarked for schools, hospitals and other projects," he said.

The MP, popular referred to as "Joe T" made the statement with the media following the call on him by the Board Chairman of Appolonia City, Mr Daniel Tetteh for his outfit to intervene in the illegal sale of lands in Appolonia Town.

Over the past few years, Appolonia town has been faced with issue of land encroachments and sale of reserved lands meant for the construction and expansion of schools and hospitals.

Some lands which have been reserved for developmental projects at Appolonia town has been taken and sold to private developers.

Those involved are syndicates who resort to the use of forgery of documents to convince interested buyers.

Last week at the 75th anniversary launch of Appolonia Methodist School, the Board Chairman of Appolonia City who is also the Executive Chairman of Ronidany Company Limited, appealed to the office of the MP, the Municipal Assembly and the leadership of the Ga Adangbe who are currently serving in the current administration to intervene in the issue.

Mr Tettey said it was sad to witness an increase in illegal sale of community land to private developers at Appolonia Town.

Since he resumed office in 2020, he said his office had been busy looking for ways to address the developmental challenges within Appolonia Town and the Kpone-Katamanso.

Mr Tettey mentioned road networks, expansion of the Appolonia school, new police post and hospitals as some of the major areas his outfit was working on.

According to him, he had toured every part of the constituency and documented the developmental challenges confronting the Kpone-Katamanso, adding that effort were being made to address those issues.

Mr Tettey said the challenges confronting Kpone-Katamanso, especially Appolonia Town could not be solved if the people did not work as a team.

" We will need unity and selflessness among inhabitants of Kpone- Kantamanso to address the problem that confronts the people," he said.
Mr Tettey said he was excited and thankful of the management of Appolonia City for putting up one of the best residential hubs in the West Africa.

He described Appolonia City as a model project that have enhanced and opened up the Appolonia Town and brought great image to the Ghana in the eyes of the international community.

Mr Tettey said he would wish that more of such project could be done in the town and the Kpone-Katamanso since it would continue to open the place to huge business opportunities.

" This is why we cannot allow miscreants to use their own selfish interests to halt the growth of Kpone- Kantamanso and its surrounding communities," he said.

He also urged companies who had benefited from Appolonia Town, especially Kpone where many companies were located to help contribute their quota to development in Kpone-Katamanso constituency.

According to him,  he had already visited few companies who have vowed to contribute to the development of Kpone-Katamanso.

" I am calling on all those companies to come on board and help develop the constituency" Mr Tettey said.
He mentioned that his mandate had to serve his people and he would not let them down.