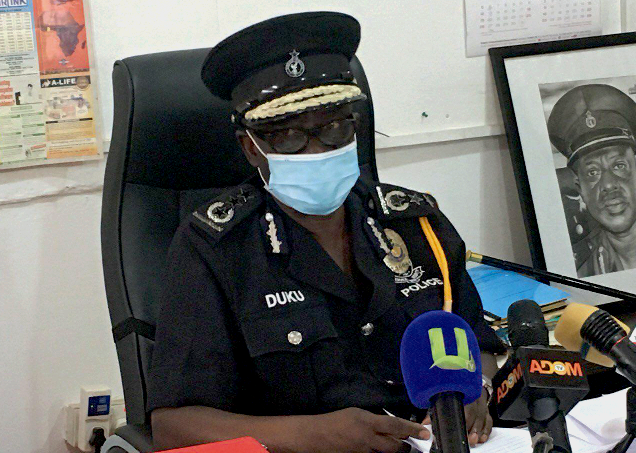 The Ashanti Regional Police Commander, Commissioner of Police (COP) Kwasi Mensah Duku, has given the assurance that the police will do everything to protect the peace of the region as the December 7 general elections get closer.

He stressed that the police were on the ground, and with the support of sister security agencies, had adequately prepared themselves to ensure peace before, during and after the polls.

COP Duku gave the assurance at a press briefing in Kumasi last Wednesday.

He spoke on recent cases of violent crimes in the region, and said the command had prepared itself for the upcoming elections.

The regional commander also called for cooperation among the citizenry, and cautioned that anybody who misconducted themselves would face the full rigours of the law.

He said there were series of serious motor accidents in the region, and mentioned one which happened recently on the Offinso road which, he noted, was avoidable.

On the crime situation in the region, COP Duku noted that it had been relatively manageable despite the two recent violent robberies at a mining site at Bekwai, and another attack on a bullion van at Manso-Nkwanta.

With reference to car snatching, COP Duku said the command had arrested four persons who were the brain behind the robberies of Toyota Hilux pick-ups and SUVs in the Kumasi metropolis and other places.

He said at about 9.30 p.m. on Tuesday, September 1, 2020, the suspects — Michael Kwakye, aka America; Kwadwo Korankye, aka Joe; and one person named only as Mustapha, all in their 30s — snatched a Toyota Hilux pick-up with registration number GN 526-19 from its owner.

But when a report got to the Atasemanso Police, they expedited action and the next day, at about 12 noon, the police intercepted the vehicle at Oduom, near the Kwame Nkrumah University of Science and Technology (KNUST), with the number plate changed to GN 5723-18.

According to COP Duku, on Friday, September 4, 2020, two of the suspects — Kwakye and Korankye — were arrested at their hideouts at Santasi Roundabout and Kotwi respectively, and during interrogation, they mentioned Adam Sulemana Sani and Mustapha as their leaders.

Sulemana Sani was subsequently arrested, while Mustapha was still on the run.

COP Duku said Korankye and Kwakye were identified by their victims during an identification parade conducted by the command.

According to COP Duku, prior to that, Korankye was arrested in another robbery at Kintampo in the Bono East Region where he and his accomplices snatched a Toyota Hilux pick-up and a Mitsubishi Pajero belonging to Fidelity Bank at Kokobra, near Ejisu, on May 5, 2019.

He, however, jumped bail when he was put before court.