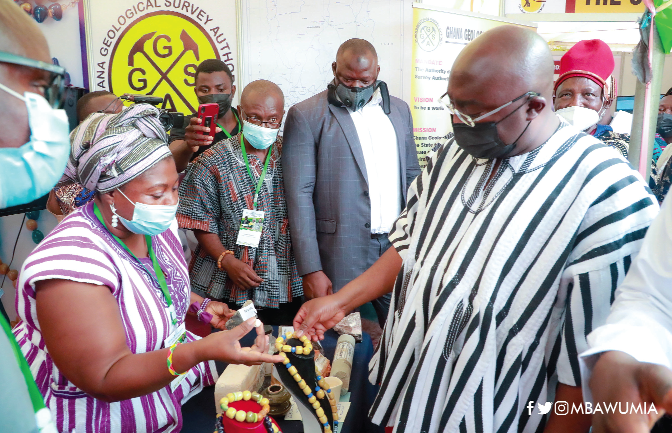 The Vice-President, Dr Mahamudu Bawumia, has reiterated government’s commitment to protect the environment at all costs and ensure its sustainability.

“We have to acknowledge that Ghana is not made up of only humans, but it is also made up of the soil, mountains, valleys, forest, rivers, lakes and the sea, plant and animal lives as well, without them, we humans cannot and will not survive.

“We must acknowledge that the natural environment has a right to be here as we humans do," the Vice-President stressed in his keynote address at the Northern Belt Consultative Dialogue on small-scale mining and deforestation in Tamale yesterday.

He said the contributions of the mineral and forest resources to the country's national development agenda could not be over-emphasised, and condemned Ghanaians who were exploiting the natural resources of the country for their selfish gains.

The consultative dialogue, on the theme: " Sustainable small-scale mining and forest conservation for national development," was attended by captains of the mining and forest industry, academia, members of civil society organisations (CSOs), ministers of state and their deputies; traditional authorities and a section of the public.

It was to collate views towards the sustainable management of the country's natural resources and the environment for national development.
The government decided to add deforestation to the consultative meeting held in Tamale because of the fragile ecological sector of the northern part of the country.

Dr Bawumia stated that the government would continue to find innovative ways of maximising earnings from mining and forest resources to provide the needed infrastructure in the country.

However, in doing so, he stressed that the government would not compromise on the unsustainable practices that negatively affected the environment through illegal mining.

According to him, many livelihoods depended on the mining and exploitation of forest resources, and because that had not been carried out in a sustainable manner, it has had a negative impact on the natural environment.

He, therefore, called on Ghanaians to come on board to help protect the environment which was under threat through negative practices such as illegal mining that has led to the pollution of water bodies.

Dr Bawumia re-echoed the statement of President Nana Addo Dankwa Akufo-Addo at the national consultative forum held in Accra about two months ago to buttress his point, stressing: "Mining can create jobs, can improve livelihoods, mining can generate wealth, but it cannot and must not do so at the expense of damaging the very environment that protects and produces the wealth.”

On the issue of deforestation, the Vice-President further noted that the northern sector of Ghana lay within a fragile ecological sector and, therefore, had its own challenges as far as natural resources exploitation was concerned.

He said activities such as illegal harvesting of wood in certain parts of the country, especially rosewood; improper agricultural practices and sometimes, conflict in the northern sector of the country, was contributing to the degradation of the forest cover in the north.

It was, therefore, important to find innovative ways to deal with the issue of deforestation and its attendant effects on the environment, which was also fuelling climate change.

Dr Bawumia acknowledged that Ghana was endowed with a lot of minerals, forest and wildlife resources which had been exploited over the years for national development, but now, there was a need for its sustainable management by all, for the country to continue to derive the maximum benefits.

He stated that the theme for the dialogue was appropriate as it aligned very well with the provisions that underlined the natural resources policy framework as well as international protocols on sustainability.

"Sustainability is key in our quest to exploit our diverse minerals, forest and wildlife resources to ensure we are able to meet our present need without compromising the ability of future generations to meet their own needs," he added.

The Vice-President further noted that the exploitation of the country's natural resources was part of our national lives and must be separated from partisan politics.

That, he said, would enable the country to build a broad-based national consensus around which " we can deal with the menace of illegal mining and deforestation."

The Minister of Lands and Natural Resources (MLNR), Mr Samuel Abu Jinapor, in his address, emphasised that the crackdown on illegal mining could not be avoided as it was necessary the government took steps to sanitise the industry.

Mindful of the loss of livelihoods that the exercise would lead to, the minister intimated that the government, through the MLNR, was formulating comprehensive alternative employment and livelihood schemes for illegal miners affected by the ongoing efforts to clean up the sector.

Mr Jinapor, who is also the Member of Parliament for Damongo in the Savannah Region, further indicated that following a total ban on the export of rosewood which took effect on July 2, this year, a ministerial team, chaired by his deputy, Mr Benito Owusu Bio, had been set up to liaise with the Customs Division of the Ghana Revenue Authority (GRA) to ensure strict compliance of the ban.

Additionally, as part of measures to deal with the issue of deforestation, the government through the Forestry Commission, has secured funding from the Green Climate Fund to implement a project that seeks to address the drivers of deforestation and forest degradation and promote the cultivation of shea in the northern part of the country.

He commended chiefs in the Savannah Region for taking steps to protect the forest cover by placing an outright ban on all forms of tree harvesting within the region.

The Northern Regional Minister, Alhaji Shani Alhassan Shiabu, in his welcome address, also emphasised the need to find a solution to the challenges to ensure that the natural resources remained a source of ‘blessing’ to the nation.