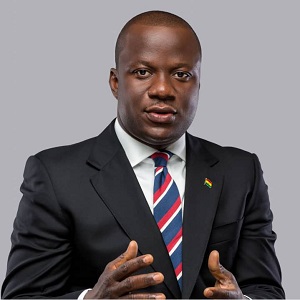 The country is positioning itself to optimise the benefits from the green transition, the Minister of Lands and Natural Resources, Samuel Abu Jinapor, has said.

“The government is committed to promoting and developing our green minerals, generating value-added benefits along the full value chain, creating linkages with the other sectors of the economy and contributing to halting climate change and its devastating consequence on the lives and livelihoods of our peoples,” he said.

Mr Jinapor gave the assurance when he presented the government’s policy statement on the development of the country’s green metals to Parliament last Wednesday.

The green transition is increasingly gaining momentum in Africa, with all 54 countries signing on to the Paris Agreement.

Mr Jinapor, who is also the Member of Parliament (MP) for Damongo, noted that the country was blessed with significant deposits of lithium in parts of the Northern Region, Cape Coast, Kumasi and Sunyani.

He added that there were many prospects that were being explored in the southern granitic terrain which stretched from Senya Bereku through Winneba and from Saltpond to Cape Coast.

Furthermore, he said there was potential interest in the nearby Egyasimanku Hill, whose investigation had identified a lithium deposit of approximately 1.48 million tonnes.

He said intensive exploration for lithium was underway at Ewoyaa in the Central Region to enable the country to take advantage of the global transition to green minerals.

The exploration, he said, covered a total area of 684 kilometre square and drilling had already begun in 2017.

He, however, said discussions were still ongoing at the ministerial level to determine the best governance and legislative framework that would ensure that the country derived optimal benefits from those green minerals.

In addition to lithium, he said, there were also occurrences of cobalt, nickel, copper, lead, zinc and chromium in the Buem Formation in the Oti Region and graphite at Kambale in the Upper West Region, as well as the Prestea-Konongo-Obuasi belt.

Those minerals, Mr Jinapor said, required further geological investigations by the Ghana Geological Survey Authority in order to ascertain their commercial viability, an exercise which would be pursued with the needed urgency and vigour.

The minister said the importance of those green minerals to the socio-economic development of the country required that “we adopt a governance, legislative and regulatory framework that will position our country as a key player in the green transition”.

Already, he said, the Minerals Commission had been established for the regulation and the management of the utilisation of the mineral resources and the coordination of policies in relation to them.

Contributing to the statement, the Minority Leader in Parliament and MP for Tamale South, Haruna Iddrisu, commended the government and the sector minister for repositioning the country’s mineral resources sector to derive the maximum benefit from the green minerals.

He said although the sector contributed about 30 per cent to the national economy, the exploitation of those mineral resources had not brought about any meaningful development in mining communities across the country and, therefore, there was the need to take a second look at that side of mining.

He called on Parliament to demand value for money from the signing of mineral exploitation contracts for the benefit of mining communities.

For his part, the Majority Chief Whip and MP for Nsawam-Adoagyiri, Frank Annoh-Dompreh, stressed the economic importance of mineral resources to the country and said he was happy with the bold steps the sector minister was taking to ensure that Ghana derived maximum benefits from those mineral resources.