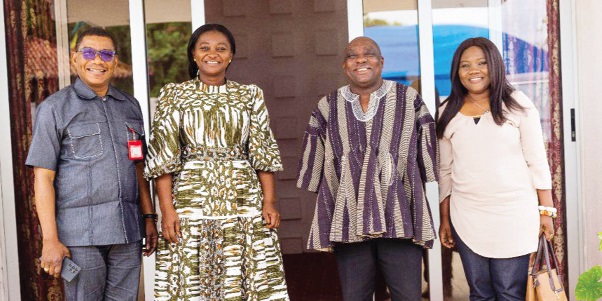 The Central Regional Coordinating Council (CRCC) is working at positioning the region as an attractive and preferred investments destination through aggressive rebranding strategies.

The Regional Minister, Justina Marigold Assan, said the many unique attributes and potentials of the region placed it at a great advantage to attract investments for its accelerated development.

She said this when the Editor, Graphic, Kobby Asmah, called on her at her office last Friday as part of his working visit to the region.

She said the region had great potential for tourism, educational and industrial development which could be explored for its well-being and that of its people.

However, she said, those attributes had not been projected in a manner to attract the needed investment for the region’s transformation.

Mrs Assan indicated that the region’s 2030 development strategy, which was expected to be launched by the end of the year, would provide a policy direction for its management and accelerate its transformation and development agenda.

She thus called for active stakeholder collaboration and support to achieve the region’s development targets.

Mr Asmah said the Graphic Communications Group Limited (GCGL) was committed to promoting nation-building and would extend that same commitment to partner the CRCC to promote its development agenda.

He noted that the GCGL had been instrumental in getting the government’s development agenda and policies to the people and served as a conduit for getting the concerns of the citizenry to the government for redress.

He said the group and its newspapers would continue to support the government’s development agenda, while ensuring accountability of duty bearers for the growth of the country.

Mr Asmah further indicated that the Daily Graphic, as well as its sister newspapers, had built strong credibility on its mantra: “Truth and Accuracy Every Day”, saying the newspaper should be the CRCC’s preferred option in news coverage.

The strategic framework document is expected to provide policy direction for the management of the region to accelerate its transformation and development agenda.