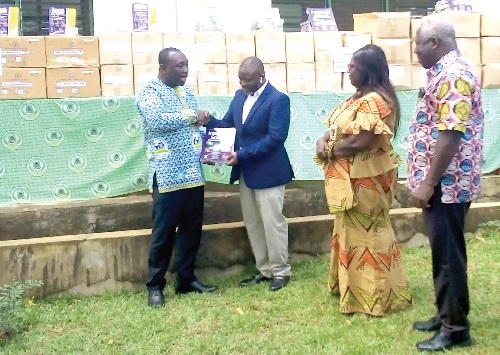 The Volta River Authority (VRA), as part of its corporate social responsibility, has presented 2,250 Mathematics, Integrated Science and English Language textbooks worth GH¢1.5 million to five senior high schools in the Asuogyaman District in the Eastern Region.

Presenting the books on behalf of the management of VRA to the beneficiary schools at Akwamuman Senior High School, the Community Relations Manager of VRA, Samuel Fletcher, said over the years, the authority, as part of its corporate social responsibility, had invested much in education, especially on scholarships at the senior high school and tertiary levels.

He said the authority had also created scholarships for Technical, Vocational Education and Training (TVET).

He said for instance, last year when the authority celebrated its 60th anniversary, it touched the lives of 16,000 students in 31 schools in its catchment areas with teaching and learning materials.

Mr Fletcher noted with concern that even though the authority was aware that what it gave would not meet all the challenges the schools were facing, it would, to some extent, help cushion the schools to reduce the burden on textbooks deficit the schools faced.

Mr Fletcher said the VRA was always ready to impact the lives of the communities in its operational areas so long as it existed and advised the students to make judicious use of the textbooks presented to them.

The District Director of Education, Augustina Adjoa Owusu, also lauded VRA for assisting educational institutions in the district with learning materials, adding that “the books will touch the lives of the students”.

The Adontehene of Adjena, Nana Ofori Kyekyire, who chaired the function, was also grateful to VRA for its support and gave an assurance that the chiefs and people of the Akwamu Traditional Area would always give them moral support as they operated in the area.