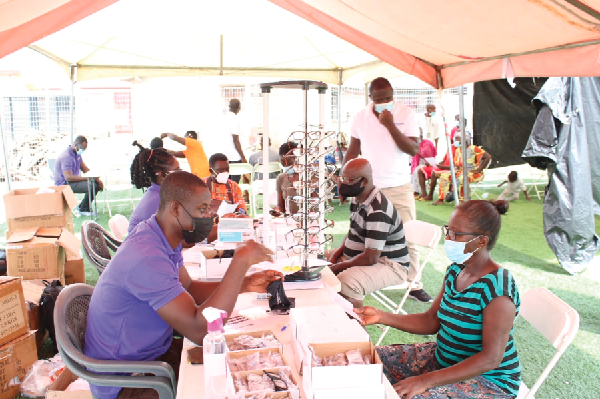 VisionSpring, an eye care organisation, has organised eye screening for residents of Nsawam-Adoagyiri in the Eastern Region to improve eye care delivery.

The six-day exercise was organised in collaboration with the Member of Parliament of Nsawam-Adoagyiri, Mr Annoh Dompreh, to help promote eye care and treatment as well as increase eye glasses coverage among the residents.

The VisionSpring eye screening initiative saw 2,700 residents undergo the exercise where 1,200 reading and pop-in eye glasses were distributed to persons in need of glasses.

The pop-in eyeglasses is a flagship product of VisionSpring that is fitted and dispensed on-site.

In addition, 1,000 eye drops were distributed during the exercise.

The exercise, he said, was a follow-up to an earlier eye screening exercise organised for staff of Blue Skies Juice Factory, and 700 other residents of Nsawam-Adoagyiri in September this year.

In an interview with the Daily Graphic, the Optical Technical Advisor of VisionSpring, Dr Collins Asomani, lamented the inaccessibility of eyeglasses by persons in need of them due to poverty.

Dr Asomani said a survey carried by the Ghana Health Service (GHS) in collaboration with other non-governmental organisations (NGOs) in 2015 indicated that 95 per cent of persons with underlying eye conditions who needed glasses could not afford them.

Citing a statistic from the Ghana Blindness and Visual Impairment Study, he said Ghana currently has a population of 207,200 that are blind; a statistic he predicted could soar higher without the necessary investment in eye care in the country.

Speaking on the prevalent conditions, the Optical Technical Advisor of VisionSpring said glaucoma, a hereditary and irreversible eye blinding condition, cataract and refractive errors dominated the eye conditions among the residents.

He added that Ghana had also been ranked the highest by the International Agency for Prevention of Blindness (IAPB)AB with persons living with glaucoma; a situation he appealed to stakeholders in the health sector to work on by deliberately investing in eye care delivery across the country.

He urged Ghanaians to also observe healthy diets; take in more vegetables and reduce the excessive intake of fatty food which were prelude to hypertension, a condition that could have effects on the eye.

The Head of Eye Care Service at the Nsawam Government Hospital, Dr Alfred Gardemor, expressed gratitude to VisionSpring and the MP for the area for the eye screening initiative.

The eye screening exercise, he said, had revealed that there were more prevailing cases of glaucoma, cataract, allergies and refractive errors than they expected; hence, the need for more intervention to overcome the eye care burden.

He appealed for support especially for equipment such as auto-refractor and automated tonometer to help diagnose various eye conditions among patients at the health facility.

He appealed to Ghanaians to take interest in having regular eye checks in health centres at least once a year, adding that the basic needs of the eye checks were covered by the National Health Insurance Scheme.

A 65-year-old retired teacher, Mr Maxwell Asamoah Yeboah, who received medicated eyeglasses, in an interview with the Daily Graphic, expressed gratitude to VisionSpring for the intervention, which had salvaged the cataract condition he had been battling with for the past two years.

A trader and seamstress, Ms Gladys Bredua, 72, also lauded the eye screening exercise, describing it as a blessing, as she could not afford a pair of glasses, leading to the closure of her sewing business.