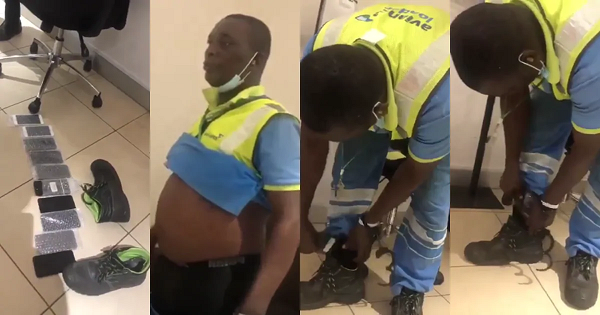 A staff of the Ground Handling Company at the Kotoka International Airport has been arrested for allegedly stealing 10 smartphones from an aircraft.

In a statement confirming the arrest of the man which went viral on social media yesterday, the Ghana Airports Company Limited (GACL) said the incident occurred on Tuesday, December 15, 2020.

The individual has since been handed over to the Airport District Police for further investigations.

"Our attention has been drawn to a video circulating on social media involving a staff of a Ground Handling Company operating at KIA. He was arrested by Aviation Security of Ghana Airports Company Limited (GACL) with several phones in his possession after handling an aircraft," the statement said.

"GACL confirms that the incident occurred on Tuesday, December 15, 2020, and the individual suspected to have been involved has been handed over to the Airport District Police for interrogation and appropriate action".

The video which made the rounds yesterday on social media shows a man wearing a high-visibility reflector jacket and trousers being strip-searched by some unidentified persons.

The man who is wearing a handcuff on his left hand is seen removing the smartphones from his socks as he is ordered to remove his shoes, lift up his shirt and lower his trousers for a thorough search.

The 10 smartphones which were retrieved from him are arranged on the floor at the end of the video.