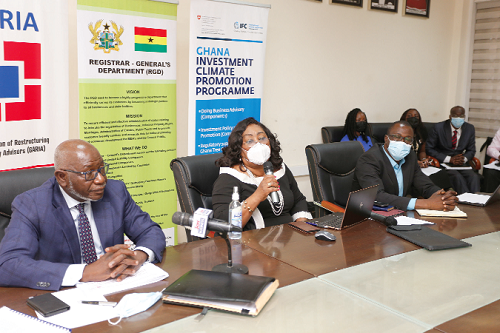 The Registrar General’s Department (RGD), in collaboration with its partners, has launched a soft copy of a user guide on the new Corporate Insolvency and Restructuring Act (CIRA), 2020 (Act 1015) to provide businesses and companies in the country with the needed information on the act.

The purpose of the CIRA is to provide the legal regime for the administration of the business, property and affairs of a distressed company in a manner that provides an opportunity for the company to, as much as possible, continue to be in business.

The CIRA, which has come to replace the Bodies Corporate and Official Liquidation Act 1963 (Act 180), was signed into law on April 30, 2020 and has features which could go a long way to assist businesses not only to survive the pandemic but also recover.

The act applies to all businesses registered under the Companies Act, 2019 (Act 992), with a few exceptions, namely, banks, insurance or any other business which is subject to special legislation, except instances when the special legislation does not provide a rescue provision, such as the Security Industries Act, 2016 (Act 929).

Speaking at the launch yesterday, the Registrar-General, Mrs Jemima Oware, said the RGD had, in recent times, embarked on a number of reforms to improve the business environment and the processes of doing business in the country.

She explained that the aim of the CIRA “is to provide more opportunities for businesses in distress to be rescued”, adding that where the rescue and turn around option was impossible, the CIRA provided a clearer process for bringing the business of an insolvent company to an end.

The RGD organised the press launch and public education with its partners — the International Finance Corporation (IFC) and the Ghana Association of Restructuring and Insolvency Advisors (GARIA).

The IFC provides technical assistance for the RGD and GARIA to develop the capacity to implement business friendly reforms in Ghana.

Written in simple language, the user guide is intended to educate lay members of the Ghanaian business community to better appreciate the act and demystify corporate insolvency and restructuring.

The user guide will be on the RGD’s portal for easy reference, while GARIA will also distribute electronic copies of it for the use of stakeholders.

Mrs Oware explained that the new act considered a company to be in distress “when it is unable to pay its debts or current obligations when they are due (insolvency), or when the total liabilities of the company exceed its total assets (negative net worth)”.

She noted that although the recovery of distressed companies was the central focus of the CIRA, creditors’ interests “are well protected”, saying “the CIRA grants direct powers to creditors, which gives them a key role in decision making”.

She further explained that the CIRA mandated the RGD to set up the Insolvency Services Division to regulate insolvency practice in the country.

The President of the GARIA, Mr Felix Addo, in a presentation on the CIRA, said prior to the enactment of the CIRA in 2020, there was no general legislation providing for the restructuring of companies, although there were sectoral acts dealing with specialised deposit-taking institutions and insurance which had such provisions.

He explained that the key elements of the CIRA were administration, restructuring, liquidation, establishment of the insolvency services division and cross-border insolvency rules.

Mr Addo added that the CIRA also provided for the temporary management of the affairs, business and property of a distressed company.

He pointed out that the implementation of the CIRA would be done by three major institutions — the RGD, aided by its insolvency services division; the High Court and the GARIA.

He explained that although the CIRA created space for individual insolvency practitioners (IPs) to handle issues of insolvency, only chartered accountants, lawyers and bankers who were in good standing in professional bodies could become IPs.