The United States (US) Embassy in Ghana has been inundated with numerous requests by Ghanaians who participated in the 2018 US green card lottery, also known as the Diversity Visa Lottery.

The participants, it appears were encountering difficulties with entering their confirmation codes on the Diversity Visa Lottery website -  dvlottery.state.gov

In a post on Facebook, the US Embassy disclosed that their inbox was being flooded with messages about invalid confirmation codes from participants who registered in October last year. 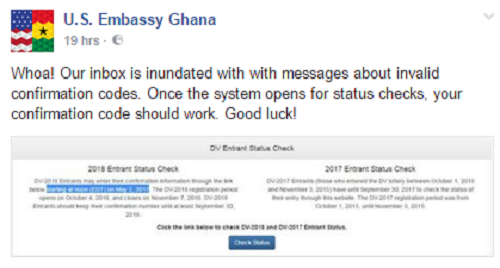 The requests come in the wake of reports last week about 7,000 Ghanaians in the United States facing deportation for visa-related offences including staying illegally in the country after their permits had expired.

“In fact, about 7000 of them are currently at different stages of the deportation process. And we are not apologetic about that,” the US Ambassador to Ghana, Robert Jackson was quoted as saying. 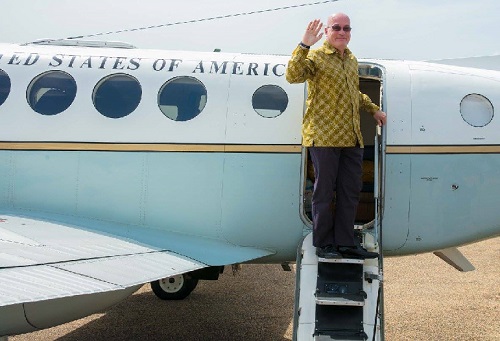 The US Ambassador to Ghana, Robert Jackson

The embassy also dispelled fears that about 99 percent of selected applicants for the lottery would be denied visas after paying the processing fees.

The US Embassy posted: "...we are still issuing both immigrant and nonimmigrant visas to those who qualify. The problem is those who overstay their temporary visas or otherwise violate the terms of their visas. If people go to the United States on temporary visas, we expect them to return. People who obey the law, who stay in status, are welcome. Those who abuse their visas can expect to face the consequences. It's also important to note that those who abuse their visas make it more difficult for others to obtain visas".

More than a million Ghanaians entered the 2016 edition of the Diversity Visa Lottery, according to the US Embassy.

Out of the number, 6,000 Ghanaians were successfully selected in the computerised random selection process. 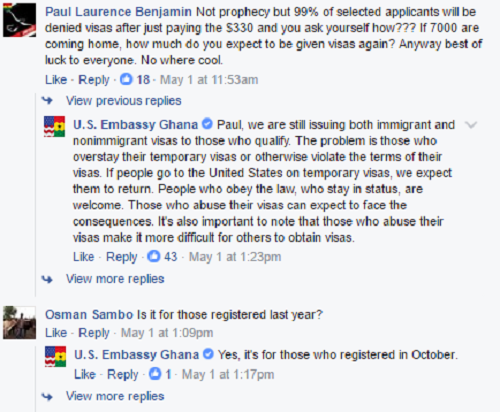 About the US Visa lottery

The lottery will give successful applicants a green card which grants them the opportunity to live permanently in the United States, work legally at most jobs (some are limited to U.S. citizens for security reasons) and be protected by federal, state, and local laws.

However, there are some rules you have to follow as a green card holder, including paying your taxes and obeying laws.

If you’re a male between ages 18 and 25, you must also register with the Selective Service (aka the draft).

The process to get a green card through the lottery is tough and full of paperwork and stress, but if you get through and win, you get a chance at a whole new life.

Over 14 million people from across the world registered for the lottery this year and about 100,000 have been chosen as winners of this year's lottery.

The lottery is free to enter, but citizens of countries such as mainland China, India, Nigeria, Canada, Brazil and Mexico are not eligible to enter.

However, there are two ways to get around your country being ineligible: your spouse must be born in an eligible country and you must list them on your application and enter the U.S. together.