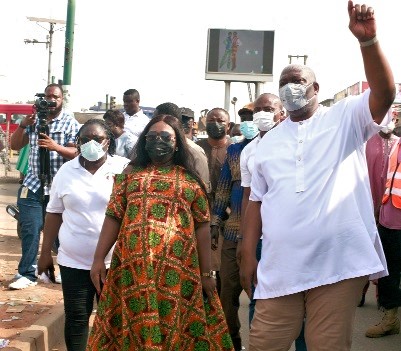 The Greater Accra Regional Minister, Mr Henry Quartey, has said that he has engaged the Director of Urban Roads to, as a matter of urgency, move to work on one of the two footbridges at Madina Zongo Junction to salvage the deteriorating facility.

He said renovation works must begin as soon as possible to forestall any disaster.

“Today, it came to our attention that the adjoining link to the footbridge is weak, so I have spoken to the Director of Urban Roads, and as soon as possible, the agency in charge of footbridges should move to the site to see how best we can work on it immediately,” he said.

The minister gave the directive in Accra last Monday during a follow up visit to the Madina Zongo Junction as part of the “Operation Clean Your Frontage” exercise under the “Let’s Make Accra Work” agenda.

During the visit, Mr Quartey and the Chief Executive of the La Nkwantanang Madina Municipal Assembly (LANMA), Mrs Jennifer Dede Afagbedzi, inspected the demolition of illegal structures belonging to people who traded along the stretch of the Madina Zongo Junction road.

They also visited the new 22-acre Madina Market to assess the relocation of the traders and their resettlement at the market.

The market has a child care facility for the traders.

It also has bathrooms, washrooms and a biogas facility.

Mr Quartey commended the chief executive of the municipality for the work done, and urged others to do same.

Addressing the traders, Mr Quartey commended them for voluntarily moving to the new market area.

He said his outfit was engaging the Coastal Development Authority (CODA) to redevelop the market and build more sheds for them.

An excavator demolishing some structures at Madina Zongo Junction

“We have not deprived traders of their livelihood; we only asked them to move and allow free flow of traffic. We may at some stage consider a night market and work with waste management companies to ensure that the place is clean to allow motorist to go about their duties the next day,” he added.

Regarding the situation at the over 80 acres former Agbogbloshie Market, the regional minister told journalists that a contractor was on site.

He urged the public to disregard reports that part of the Agbogbloshie land had been sold, noting that the only allocation done was for the construction of a hospital under the government’s Agenda 111 project to support the Korle Bu Teaching Hospital.

Mrs Afagbedzi urged the traders to desist from going back to sell on the pavement, warning that they would not be spared, if they were caught selling on the pavement.