Urban planning needs to look back first: three cities in Ghana show why

BY: The Conversation
Category: General News 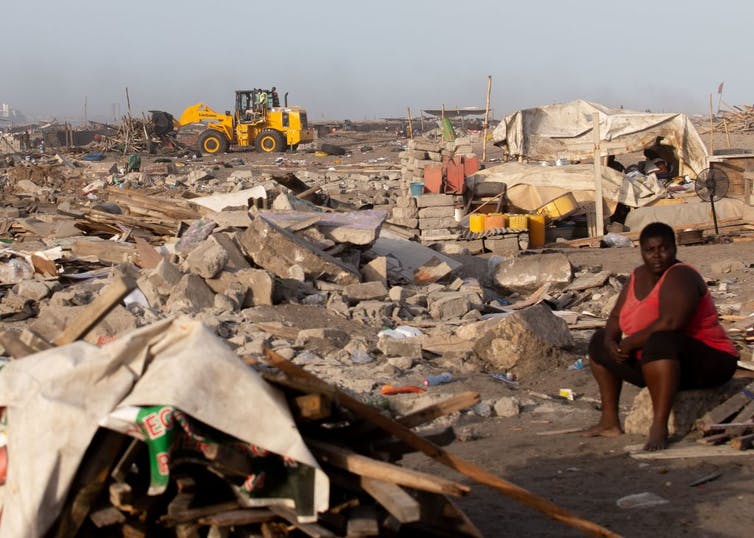 A woman sits at a site in James Town, Accra, demolished in May 2020 to make way for a new fishing port complex. Photo by Nipah Dennis/AFP via Getty Images

Months into the global COVID-19 pandemic, policymakers have begun discussing what the “new normal” might look like in metropolitan environments. Some urban planners have framed COVID-19 as an opportunity to re-imagine and improve cities’ built landscapes.

Such calls follow a common prescriptive: that post-epidemic planning will reinvent cities into dreamscapes of public health, equality and technological progress.

Urbanism journalist Alissa Walker recently argued, though, that now is not the time for imagining an urbanist utopia. Instead, she writes, people must come to terms with the historical processes that have

“made COVID-19 more catastrophic than it should have been”.

Doing so, argues Walker, requires an honest accounting of the role that fields like urban planning, public health and social work have played in producing urban inequality.

The connection between these fields has roots in 19th and 20th-century empire. Throughout much of the African continent, colonial officials exploited outbreaks of disease to implement racial segregation and create economic systems that intentionally marginalised Africans.

We are historians of Ghana, each currently writing about a different major city. These are Kumasi, Accra and Sekondi-Takoradi. In our research efforts – and in those of many other scholars – we’ve repeatedly seen how medical experts and modernist urban planners exploited outbreaks of disease.

Their efforts legitimised emerging systems of technical expertise and advanced white supremacy, global capitalism and imperial order. Those practices, which sidelined indigenous values and systems in favour of Western models, are reproduced through urban planning, public health, and development practice in cities across the continent.

There is persistent surprise at the low levels of COVID-19 infection on the continent. There are also inaccurate predictions about its potentially deadly consequences. This suggests that Western models continue to operate as African and global leaders grapple with COVID-19.

In the late 19th century, colonial governments often gave medical authorities wide latitude as the de facto architects of urban space. This was inspired by outdated scientific theories of contagion and disease. As the field of urban planning emerged in the 20th century, its practitioners built on these earlier models, reinforcing existing patterns of racial segregation and economic inequality.

Take the example of Accra, the Ghanaian capital city. It became the capital of the country then called Gold Coast in 1877. After 1877, British officials sought to decongest the city centre so that they could better control populations and create space for their own administrative and economic activities.

Their efforts were most effective in the aftermath of epidemics and natural disasters. These were occasions when urgent public health needs emboldened official action and left local communities vulnerable. Following the city’s first plague outbreak in 1908, colonial officials evacuated the most congested districts and moved residents to “safe” peripheral areas. An earthquake in 1939 inspired additional relocations, allowing the government to seize land for its own purposes.

Similar patterns unfolded in the second city of Kumasi, a regional trade hub. In 1924, residents experienced their first plague. Shortly thereafter, they experienced drastic spatial changes in the name of sanitation and urban order. Making a “safer” Kumasi began with the state-sponsored destruction of the city’s zongo or majority Muslim quarters. Sites were redeveloped for European residential, commercial or recreational needs. Former residents were shuttled into government-built houses not suited to healthy urban life.

In the port town of Sekondi-Takoradi, now a joint city, outbreaks of disease – real and imagined – were frequent flashpoints for the flexing of urban planning and public health muscle.

In 1940, Takoradi became home to a British Royal Air Force base and Allied aircraft assembly station. Experts designed a plan to demolish city structures and erect armed roadblocks to “protect” British and American soldiers from malaria. As one city resident quipped nearly 30 years earlier, the real disease that prompted such “emergency” measures was that of racial prejudice.

These examples emphasise two fundamental points. The first is that urban planning models and expertise were tethered to the interests of British Empire and oppression of colonised people.

In cities like Accra and Kumasi, which had been settled long before the arrival of the British, outbreaks of disease were opportunities to remake the towns and seize land from local residents. In the planned town of Takoradi, concerns about disease gave planners another chance to control urban residents. Their efforts produced two distinct zones for the colonised and the colonisers.

Second, colonial state planning and public health efforts often targeted, and at times destroyed, local forms of urban knowledge and city design. In many cases, local sanitation and hygiene practices were far more effective than those touted by European experts.

The resilience of African urban spatial, social and economic cultures in the face of this social engineering warrants more attention. But it’s also important to acknowledge the spatial, cultural, and economic violence that people endured in the name of urban improvements.

Listening to the communities

These kinds of reflections are important in Ghana right now, as the Accra Metropolitan Assembly continues to demolish homes in working-class communities in Accra.

The patterns of colonial spatial violence that played out in Ghanaian cities echo around the world. Contemporary debates about gentrification, inequality and social determinants of health in 21st-century cities point to the importance of revisiting the politics of colonial capitalism and public health.

Building new cities needs to start with new conversations that place cities like Accra, Kumasi and Sekondi-Takoradi at their centre. It must recognise the thinking that pervades professional fields charged with improving urban life. This process starts with seeing and listening to the communities that experts have long excluded from policy debates.

An earlier version of this article appeared in Nursing Clio.