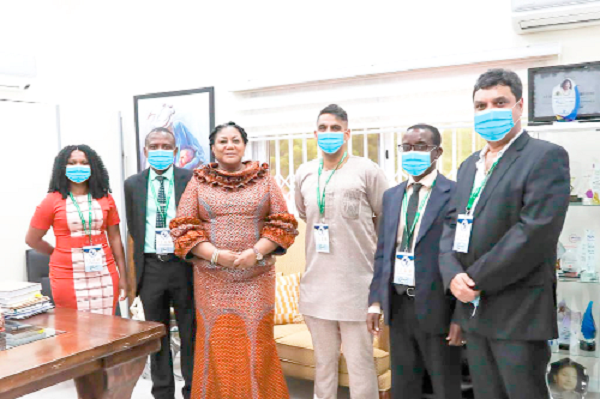 The company presented the foundation with 10,000 doses of its anti-malarial drug, Duomal, along with some personal protective equipment (PPE).

The Public Relations Director of the company, Nana Yaw Mohan, who led a delegation of senior officers of the company, explained that the company was passionate about the First Lady’s initiative to improve the lives of Ghanaians, especially women and children.

He said the company would continue to partner the foundation to ensure that it realised its vision.

Responding, the Director of Operations at the foundation, Mrs Akosua Newman, commended Unichem Ghana for the donation and expressed gratitude for its generosity and support towards the people of Ghana.

For his part, a Senior Pharmacist of the Unichem Ghana Group, Mr Basil Akussah, explained that the company was presenting the anti-malarial dispersible tablets which were manufactured locally.

“Our anti-malarial dispersible tablets are easier to administer than the traditional suspensions,” he said, adding that because they were manufactured locally, they had the advantages in dosing, stability, storage, cost and transportation.

“These will allow children in remote parts of the country access the drug,” Mr Akussah stated. He was worried that malaria still remained a major cause of death in the country, mostly among children under age five.

He told the First Lady that the company had been delivering health care in Africa for over 60 years and was primarily established as a chosen marketing and distribution entity for global multinational companies such as Pfizer, Boots and Sanofi.

“Having started local manufacturing in 2008 under the licence of LUEX U.K., the company now seeks to grow the portfolio percentage of drugs manufactured locally appreciably.

“This will be transformative and in line with the initiative of President Nana Addo Dankwa Akufo-Addo to boost local manufacturing which seeks to promote local drug manufacturing.