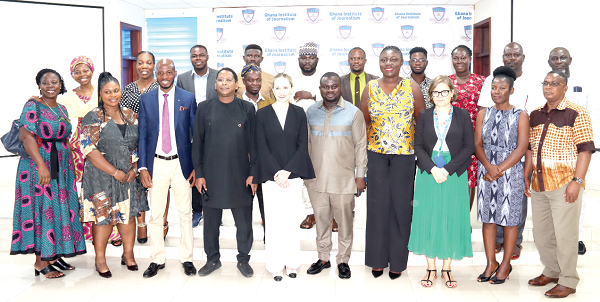 According to him, access to information contributed to advancing the promotion and protection of human rights during migration.

He was speaking at a two-day stakeholders' forum on Media and Voices of Migration in Accra yesterday.

The stocktaking and experience-sharing event is being attended by 60 media persons under the ‘Empowering young people in Africa through media and communication’ project being undertaken by UNESCO.

It forms part of a three-year project UNESCO, the International Organisation for Migration (IOM) and the Ghana Commission for UNESCO, with funding from the Italian Agency for Development and Cooperation, are engaged on across six West African countries.

The implementing partners are the Ghana Community Radio Network, the Ghana Journalists Association (GJA), the Ghana Independent Broadcasters Association, Ghana Graffiti, the Media Foundation for West Africa and the Department of Communications Studies of the University of Ghana.

Mr Diallo said the project, which was launched in France in January 2019, was born out of a financial instrument that was adopted in 2016 by the Italian government to support interventions to rekindle dialogue and cooperation between Italy and African countries, as the former was considered a priority destination by migrants.

“This three-year project sought to address the root causes of migration, including the high youth unemployment rate in Africa, by improving access to information, freedom of expression and building the capacities of the youth and the media.

“As this project comes to an end, this forum will provide the platform for stakeholders to share experiences and good practices and in the long run also provide recommendations to be submitted to a Regional Scientific Committee to identify and analyse practices, constraints and challenges on access to and processing of information on migration,” he said.

The Italian Ambassador to Ghana, Daniela d’ Orlandi, said migration was a global phenomenon which, according to IOM data in 2022, involved 280.6 million international migrants.

“Moreover, according to the UN Department for Economic and Social Affairs, the number of emigrants from Ghana has more than doubled in the last 20 years,” she said.

The Secretary-General of the Ghana Commission for UNESCO, Ama Serwah Nerquaye-Tetteh, also expressed concern over issues of migration, especially in West and Central Africa.

The President of the GJA, Albert Kwabena Dwumfour, pledged the support of the association to the project.

The Deputy Rector of the Ghana Institute of Journalism, Prof. Eric Opoku Mensah, said the institute was interested in issues of migration because the media could shape actions of actors.

The Head of the Department of Communications Studies of the University of Ghana, Dr Abena Animwaa Yeboah-Banin, named the drivers of irregular migration to include harsh economic conditions, lack of opportunities and misinformation.