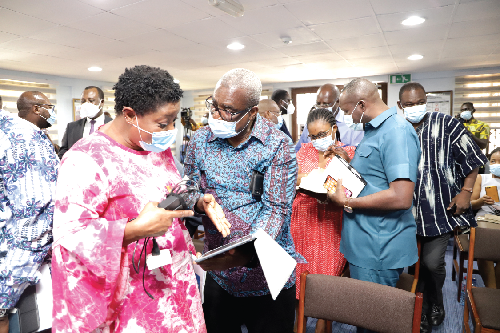 Unemployment remains the major issue the people want the government to address, a survey conducted by the Centre for Democratic Development (CDD-Ghana) has revealed.

And in spite of the scourge of the COVID-19 pandemic, the survey also showed that health was the fifth top priority of the people, with roads and infrastructure, education and the management of the economy coming second, third and fourth, respectively.

Dubbed CDD-Ghana 2020 Post-election Survey, the research was conducted from May 23 to June 3, 2021, with a sample size of 2,400 people randomly selected from across the country.

The Director of Research of CDD-Ghana, Dr Edem Selormey, who presented the findings in Accra yesterday, said with the exception of the 2020 pre-election survey, unemployment continued to be the topmost priority in many of the researches conducted by the organisation.

“Health came in fifth, which is a little surprising, in view of the fact that we are in a pandemic,” she said.

Among those in attendance were civil society organisations, the Director of Research at the Presidency, Dr Isaac Owusu-Mensah, and representatives of political parties, including the General Secretary of the ruling New Patriotic Party (NPP), Mr John Boadu; the NPP Election 2020 Campaign Manager, Mr Peter Mac Manu, and the Deputy Campaign Manager for Election 2020 of the opposition National Democratic Congress (NDC), Mr Alex Segbefia.

The survey also showed that majority of the people (36 per cent) wanted the government to channel more investment into the free senior high school (SHS) policy, with only five per cent asking it to dedicate more investment to its industrialisation agenda, such as the One district, One factory policy.

Dr Selormey explained that the disparity in respondents making employment their priority and seeking less investment into the One district, One factory policy was because of the lack of confidence in the initiative by respondents.

Fifty-two per cent of respondents, however, had confidence that the government was effectively implementing the free SHS policy, with 48 per cent of them saying it would extend electricity to cover the entire country, while 49 per cent believed it would consolidate the gains from the Planting for Food and Jobs initiative.

The survey further revealed that majority of respondents (80 per cent) expected the current structure of Parliament, where the NPP and the NDC have 137 seats each, to keep the Executive in check, improve parliamentary democracy and also force MPs to attend Parliament.

Again, 77 per cent of respondents were of the opinion that the election of Mr Alban Bagbin of the NDC as the Speaker of Parliament would make the President and the government more transparent, while 72 per cent said it would promote cooperation between the NDC and the NPP.

Dr Owusu Mensah said the research findings were not different from what the research team at the Presidency found out in its own research.

In reaction, Mr Mac Manu expressed surprise that health was not the major concern of the people, especially in the midst of the impact of the COVID-19.

“With variants of the COVID-19 coming out, I am really disturbed that people do not see health as a top priority. People must be careful about COVID-19; it’s very dangerous,” he said.

For his part, Mr Segbefia said the lack of confidence of the people in the government’s ability to fight corruption did not surprise the NDC.

“We feel there is a culture of impunity when it comes to government officials. Despite the fact that people have behaved in a certain way, no action has been taken,” he added.