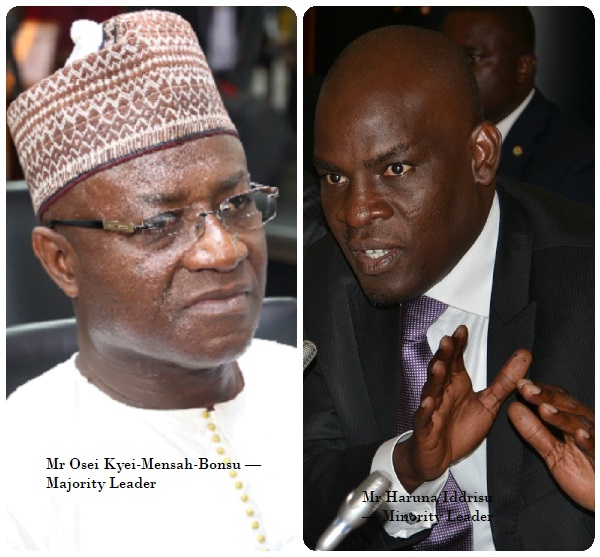 There is uncertainty surrounding the 2022 Budget, after one side of the House voted to reject it last Friday.

Tomorrow, the New Patriotic Party (NPP) Majority side of the House hopes to overturn the verdict, which they have described as “unconstitutional”.

This follows a vote by only the National Democratic Congress (NDC) Minority side that remained in the House rejecting the budget after the NPP Majority had walked out of the floor during the processes to approve the budget last Friday.

The motion to approve the budget was moved on November 17, this year by the Minister of Finance, Mr Ken Ofori-Atta, when he presented the 2022 Budget Statement and Economic Policy of the government before the House.

According to the Majority Caucus, Article 104 of the 1992 Constitution and Order 109 of the Standing Orders of Parliament were very clear.

“The two provisions, read together, require that at least 138 Members of Parliament (MPs) needed to have been present in the Chamber at the time of the purported vote.

Therefore, the claim that the budget has been rejected by 137 members of the House is null, void and of no effect because same is unconstitutional,” the Majority Leader, Mr Osei Kyei-Mensah-Bonsu, said when he addressed the press last Friday.

The Majority Leader also accused the Speaker, Mr Alban Kingsford Sumana Bagbin, of blatantly denying the Finance Minister’s request for him to be allowed the opportunity to engage both leadership of the House in order to have “some consensus on the positions the sides of the House had adopted”.

“We want to put on record that the Speaker was totally wrong in whatever business he purportedly undertook in the House in our absence,” he said.

“Mr Speaker went ahead to state that the motion on the budget, as moved by the Minister of Finance on Wednesday, November 17, was lost.

That whole procedure was unconstitutional, and as far as we are concerned, it is null and void and has no binding effect on anybody,” he added.

He said the Majority Caucus found it unfortunate that after making requests to the Finance Minister to reconsider some items in the Budget Statement, the Minority Caucus, assisted by the Speaker, refused to give the minister opportunity to accommodate its requests and, instead, hurriedly on their own, attempted to vote against the budget in a bid to subject the government to embarrassment for mere partisan reasons.

“For the record, the acts of the Minority and the decision of the Speaker to endorse it constitute an unconstitutionality and an illegality and should be disregarded, as same is void and of no effect whatsoever.

“We assure the good people of Ghana of our resolute willingness to ensure that the 1992 Constitution is respected to the letter by Speaker Bagbin and the Minority,” Mr Kyei-Mensah-Bonsu added.

In response to the Majority’s statement, the Minority Caucus has expressed shock and disappointment at the attack on Mr Bagbin by “the Majority Leader in his attempt to explain away their inability to show leadership in the House during the consideration of the 2022 Budget Statement and Economic Policy”.

“It is a known fact that the 137 NPP and the one independent MPs constitute the majority group of 138 MPs of the Parliament of Ghana and thus outnumber the NDC which has 137 MPs,” it said.

Such numbers, it said, could have secured the NPP victory in any vote and wondered why the NPP MPs ran away from the party’s own budget.

“There is no way the Standing Orders of Parliament or the 1992 Constitution supports the Majority Leader’s position that the budget has not been rejected.

It is trite law that you cannot sleep on a right and wake up to claim it.

“How could members of a governing party walk out on their own budget?

They walked out only to save their face and a damning humiliation.

They simply did not have the numbers to win any vote, much more approve a budget,” the Minority said in a statement signed by its Leader, Mr Haruna Iddrisu.

The statement noted that the Majority side did the unthinkable, and that for the first time in Ghana’s recent political history, a Majority walked out on a critical matter such as the approval of an economic policy and budget brought by its government.

“We wish to reiterate that what happened after the Majority group walked out of Parliament is perfectly legal and meets all constitutional standards and conventions of Parliament and any court will have a Herculean task to attempt to set it aside.

“The press statement of NPP MPs claiming unconstitutional conduct by the very experienced Speaker Bagbin should be disregarded with all the contempt it deserves,” it added.

It said Parliament had duly rejected the 2022 Budget, stressing that “until and unless the government removes the draconian taxes contained in the rejected budget, the NDC Members of Parliament remain unable to support such policies”.

It also called on the public to remain steadfast in their expectations and conviction that the NDC Caucus would remain committed to the cause of the ordinary suffering Ghanaian.

It urged the government to revise the budget that would, among other things, address the suspension of the E-Levy and properly engage stakeholders to agree on a reasonable policy.

It also called for the withdrawal of the Agyapa Bill, provide support for the victims of tidal waves disaster in Keta and other communities; reconstruct Paragraph 829, the wording of the Aker Energy deal, to reflect the decision of the House, as captured in the 6th August, 2021 Votes and Proceedings of Parliament.

The statement urged the government to take on board the view of the Minority and sentiments of the “Ghanaian populace and bring a budget that is acceptable and addresses the issues of the public”.

With the Speaker out of the House, one of the Deputy Speakers is likely to preside over the House as Speaker, which reduces the Majority side’s vote by one.

After four days of debate from Tuesday, November 23, this year, the House was set to approve the budget last Friday.

First, the approval delayed for about three hours when the Majority side asked to be excused for some time.

With the 138/137 aside split in the House, the Majority side had to whip up all its members into the Chamber in case the Minority’s threat of secret balloting to approve the budget was carried out.

Its absentee members, including the MP for Ayawaso Central, Mr Henry Quartey; MP for Assin Central, Mr Kennedy Ohene Agyapong, and MP for Dome-Kwabenya, Ms Sarah Adwoa Safo, had to be marshalled into the House.

While two managed to be present in the House, the Majority side demanded the Speaker to eject a spectator, Mr Johnson Asiedu Nketiah, who is also the General Secretary of the NDC, from the Public Gallery.

When the Speaker turned the request down but asked the Finance Minister to leave the Chamber before the motion to approve the budget was put to a vote, the Majority side walked out, leaving only the Minority side, which went ahead to conduct the business of the day and voted to reject the budget.