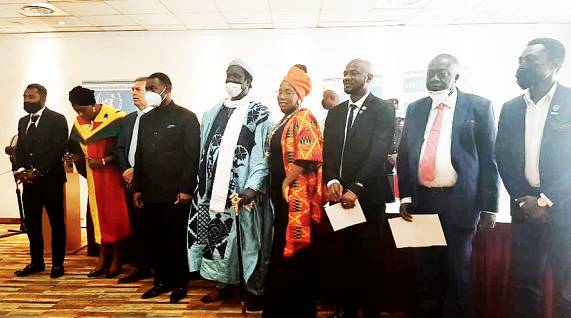 The United Nations Youth Association-Ghana (UNYA), has inducted new executive members with a call for truth and discipline in executing their roles.

The inductees, to steer the affairs of the association for one year, were admonished among other things to help maintain the status-quo of peace and security in the nation.

Lawyer Edward Osei, who inducted the executive members, also counselled them to work in accordance with the association’s rules and regulations.

The Country Head of UNYA-Ghana, Ms. Lilian Sally Addo, congratulated the newly sworn in executive members and charged them to see themselves as agents of change in their jurisdiction.

Touching on the need for peaceful coexistence, she advised the youth to live in harmony and eschew behaviours that would result in distorting the peace of the nation.

The Head Patron of UNYA-Ghana, Dr. Lawrence Tetteh, charged the youth to add value to themselves to be effective and efficient in their endeavours.

The head patron further admonished the executive members to make truth and discipline their hallmark, which would make them to live an exemplary life in the society they found themselves.

According to Sherif Adams, Head of Chieftaincy Affairs, UNYA-Ghana, it was important for the youth to tolerate one another irrespective of religion, race and political affiliation.

That, he said, would help in building and maintaining peace in the nation, adding that the executive members must work indefatigably to support the country head in fulfilling the vision of the organisation.

The UNYA-Ghana is a youth led organisation that models the United Nations' agenda. It's main objective is to be the people's movement for the United Nations and help in attaining the Sustainable Development Goal’s in Ghana.

The United Nations, of which Ghana is a member, through the security council in 2015, adopted resolution 2250 that talks about the inclusion of young people in decision making process.