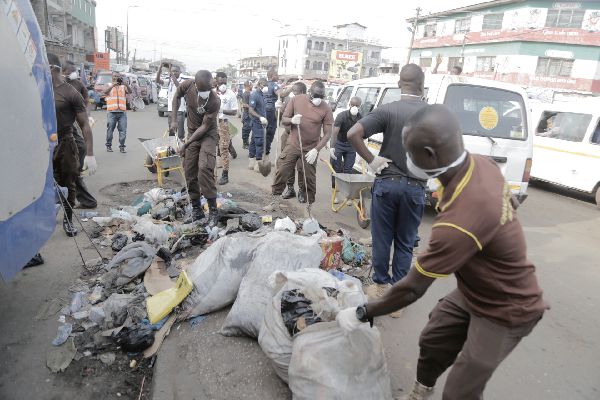 The Director of the United Nations Office for Project Services (UNOPS), Ghana, Ms Ifeoma Esther Charles-Monwuba, has called on organisations in the country to abolish single use plastics in order to prevent their devastating effect on the environment, especially in the sea.

She suggested that Ghanaians could resort more to the use of glass and ceramic bottles, cups and plates and cultivate the habit of segregating waste to make it easier for recycling.

The exercise was conducted in collaboration with Jekora Waste Segregation Limited and Plastic Punch Awareness group, an NGO.

A similar exercise was carried out last Saturday at Nima and its environs to clear the place and choked gutters of filth.

Ms Charles-Monwuba said the UN Day was to direct attention to environmental challenges that threatened the progress and achievement of the UN’s Sustainable Development Goals (SDGs) as well as to draw attention to the negative effects of single use plastic waste on marine life.

Before the clean-up the participants engaged in aerobic exercises to warm themselves up and were provided with gloves and sacks to protect against germs. They were put in groups and assigned different parts of the beach to pick up the plastic waste.

The groups worked for about two hours following which the waste collected was segregated and weighed. The waste was arranged into non-recyclable and recyclable waste.

According to the UN Environmental Programme, more than eight million tonnes of plastics enter the ocean every year and destroy marine life.

Most of the items collected were general waste which weighed about 300 kilogrammes (kg). Next were plastics which weighed 200kg and coconut husks and sticks, which weighed 150kg and 25kg respectively.

The Waste Segregation officer with Jekora Ventures, Mr Bubu Kumordzie, encouraged the public to segregate their waste right in their homes, stressing that they must also provide bins for the waste that had been sorted.

He said the different waste materials segregated were recyclable and used for different purposes.

“The problem is that the public is yet to understand that waste is not actually waste, but materials in transition. Waste is cash and so we must give it value so that we can get returns from it as a country,” he said.

A Projects Engineer at UNOPS, Ghana, Ms Hadiya Garba, said organisations should provide buy-in services for staff as an alternative to plastics so they did not carry food from long distances to the office.

“At the UN, we provide cotton bags instead of polythene for purchases during office hours,” she said.