Ukraine to establish embassy in Ghana, thanks country for UN support

Ukraine plans to establish an embassy in Ghana in future as part of efforts to expand its presence in Africa.

A publication on Ukraine's MFA website said Mr Kuleba informed his Ghanaian colleague in detail about his country's efforts to liberate Ukrainian territories from Russian occupation. 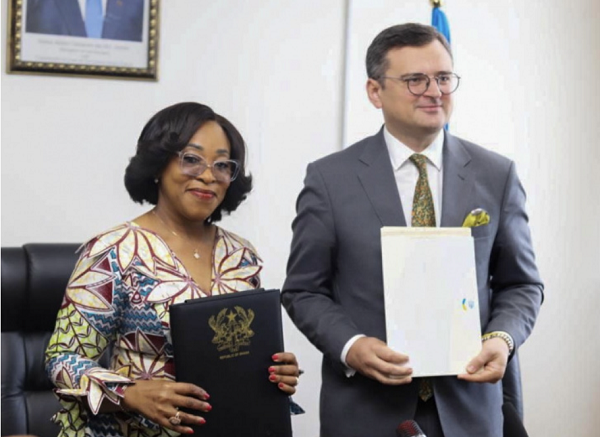 He thanked Ghana for its solidarity with Ukraine, and support for resolutions at the UN and other international organizations aimed at restoring Ukraine's sovereignty and territorial integrity.


The minister emphasized Ukraine's desire to start a new high-quality partnership with Ghana, which will be based on mutual respect, mutual support and mutual benefit.

"As part of the implementation of the African strategy, which was developed at the Ministry of Foreign Affairs on the instructions of President Volodymyr Zelensky, Ukraine is expanding its presence in Africa. We reached an agreement with the Ghanaian side: we plan to open a Ukrainian embassy in Ghana in the near future. The establishment of a diplomatic presence in Accra will give an impetus to the development of political contacts, trade, investments, cultural exchanges and cooperation in the field of education," Mr Kuleba said.

The ministers discussed in detail the steps to intensify cooperation between Ukraine and Ghana in the spheres of security, cyber security, digital transformation, and agriculture.

They agreed to start preparations for the establishment of the Joint Commission on Trade and Economic Cooperation.

They also spoke about finding ways to restore the safe education of Ghanaian students in Ukrainian universities.

The parties signed a memorandum of understanding on the training of Ghanaian diplomats on the basis of the Diplomatic Academy named after Hennadiy Udovenko at the Ministry of Foreign Affairs of Ukraine. The Ghanaian minister also reported on Ghana's readiness to consider the possibility of internships for Ukrainian students studying English.

Madam Botchway also expressed the interest of the Ministry of Foreign Affairs of Ghana in studying the Ukrainian experience in the field of combating disinformation.

As a result of the meeting, the ministers agreed to hold political consultations between the ministries of foreign affairs with the participation of representatives of various departments of the two countries to develop a comprehensive "road map" for the further development of bilateral relations between Ukraine and Ghana.