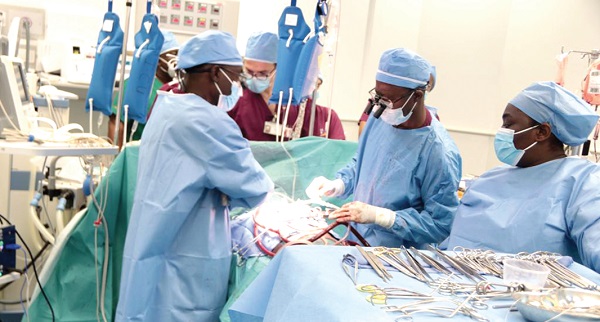 The University of Ghana Medical Centre (UGMC) has performed its first set of open-heart surgeries at its Cardiothoracic Centre.

The four surgeries were carried out by a team of local and foreign-based medical personnel, including a surgeon, an anaesthetist and two cardiologists.

The patients, made up of three males and a female and aged between 42 and 63 years, had open heart surgery for single and double valve replacement and a bypass.

The cardio centre, which is now the second biggest in the country, has eight more surgeries to perform, including that on a 10-year-old boy, beginning today.

The Head of the UGMC Cardio Centre, Dr Baffoe Gyan, said the hospital was ready to perform cardiothoracic and vascular surgeries of the heart, lungs, blood vessels, the esophagus and the coronary artery, pacemaker implantation, synchronisation therapy, decortication of clots in lungs, among others.

He said the facility was currently concentrating on adult surgery, and that with time, it would go into paediatric surgeries, which were mostly hole-in-heart cases.

He said at the moment they were ready to operate on uncomplicated hole-in-heart cases in children.

According to him, there were many people in the country who needed open-heart surgeries, but due to the fact that there was no medical facility that offered such specialised services in the country, apart from the Korle Bu Teaching Hospital, some patients were compelled to seek treatment abroad.

Dr Gyan further said the centre would use more advanced technology in the performance of surgeries, such as cutting through a small hole to operate the heart while it was still beating.

He said the centre had a capable team of medical personnel, including the technology and the equipment, to perform such surgeries.

He said his outfit would form a cardiac team, comprising a cardiologist and a cardiothoracic surgeon, who would be working together to perform the surgeries.

Dr Gyan said that would enable them to complement each other in the operating theatre.