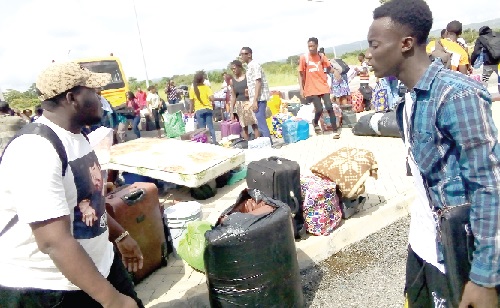 The students with their luggage getting ready to move into their various communities
30.5k Shares

The first batch of 79 second-year students of the University of Environment and Sustainable Development (UESD) in Somanya has embarked on a five-week Community-Based Experiential Learning (CoBEL) programme which forms part of the second year curriculum.

The students, who will be in 16 communities for five weeks in both Yilo Krobo and Lower Manya Krobo municipalities in the Eastern Region and Shai-Osudoku District in the Greater Accra Region, will be assisted and assessed by 20 supervisors from the university.

At a short pre-departure ceremony for the students, the Coordinator for the programme for UESD, Dr Emmanuel Angmor, said there was a huge gap among society, academia and industry which needed to be closed.

He said the students were taught a lot of things in the lecture hall and were given enough literature and theories which had prepared them for the programme, a mandatory course of study to enable them to graduate in the fourth year.


According to Dr Angmor, the students were being moved to the communities to compare what they had learnt in the university and the reality on the ground so that they would be able to do comparative analysis and also use the knowledge gained in the communities to help solve societal problems.

Dr Angmor emphasised that the programme, which was a full semester course, would help the students reduce the gap between theory and practice, identify societal issues, environmental issues, as well as political issues and use their experience on the field to solve them.

He said it would also help the students in report writing as they would gather data and write a full report on the programme as they stayed in the communities.

He charged the students to take the programme seriously, adding that any student who failed would go back to the community and take the course again before graduating.

The Vice Chancellor, Prof. Eric Nyarko-Sampson, reiterated the need for the students to take CoBEL seriously as it was part of extension of their academic work in the university and also a requirement for the award of degree when they got to the final year.

He said as a first batch, the students were the ambassadors and torch bearers of the institution, adding that whatever they did in their assigned communities would reflect on the university.

“As you go into your assigned communities, work with the appropriate authorities and opinion leaders so that by the time you leave the various communities, you would have gathered and gained much experience from your five-week stay,” he emphasised.

“Let the children in the communities see change in you by the way you dress, talk and carry yourself,” Prof. Nyarko-Sampson advised.

The vice chancellor said the programme was sponsored by the university and assured the students that no student was going to pay for it.

A student, Silas Daniel Omane, on behalf of his colleagues, assured management and staff that they were going to apply all that they were taught in the communities to come out with solutions to societal challenges.