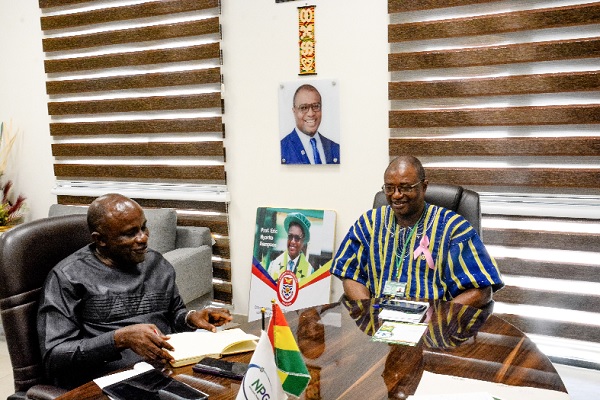 THE University of Environment and Sustainable Development (UESD) in the Eastern Region has signed memoranda of understanding (MoU) with some ministries, research institutions, non-governmental organisations and other institutions that are operating within the area of the mandate of the university to that effect to profile areas and also preserve the ecosystem and primates in the country.

The university has signed agreements with the Ministry of Fisheries and Aquaculture, the West African Primate Society, the Akwamu Guage, among others.

“We are working gradually and also identifying some natural deposits that our students can use.”

“Recently, in parts of the Manya Krobo District in the region, some deposits have been identified, which are relevant to our students pursuing geography and earth science,” the Vice Chancellor of the university Professor Eric Nyarko-Sampson told the Daily Graphic in an interview in Somanya.

The university currently has accreditation for 20 academic programmes granted by the Ghana Tertiary Education Commission (GTEC), out of which 12 are being offered by the students.

As a specialised university, it offers undergraduate programmes in science and environmental related programmes such as BSc Geography and Earth Science; BSc Energy and Resource Economics; BSc Environment and Public Health; BSc Water Resource Management; BSc Aquaculture management, among others.

Prof. Nyarko-Sampson announced that the agreement with the West African Primate Society sought to preserve the primates and the monkeys in the country.

Additionally, he said the university was also profiling picathartes birds, an endangered species found in the rain-forests of tropical West and Central Africa.

“In the whole of the country, this bird, which is said to be in danger of extinction, can be found only in the Akwamu Guage in the Eastern Region.”

“There is also another tree that can only be found in Ghana, Guinea and Ivory Coast. So, we are working to profile such areas and also look at how we can also preserve them,” the Vice Chancellor revealed.

On community relations, Prof. Nyarko-Sampson described it as “very strong”, saying that the institution’s level 300 students had just returned from a six-week residency study of the community, during which they were expected to profile the community they were sent to live in.

“The reason is that we want the students to be abreast of the happenings in the community, such that they will be in the position to find solutions to whatever happens in those communities.

“So, this community aspect is that during the second year, students are made to profile the community, tell us everything about the community, under the supervision of some selected lecturers, and then during the third year of the long vacation, the students will go back to those communities with the solutions they have proposed with the people,” he explained.

“So, we want our students to begin straight away with living in the community and looking at challenges or problems arising there,” he explained.