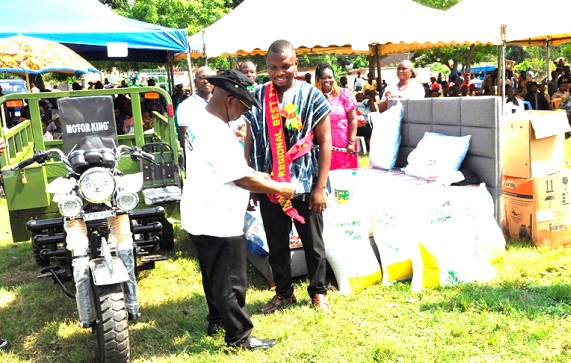 A 31-year-old Social Sciences graduate from the University of Cape Coast, Vozbeth Kofi Azumah, was last Saturday adjudged the Volta Regional Best Farmer at the 38th Farmers Day celebration in Sogakope in the South Tongu District.

The event was held on the theme: “Accelerating agriculture development through value addition”.

Mr Azumah owns Vokia Farms in Agotime-Beh, his hometown, in the Agotime Ziope District; on which he cultivated 29 acres of maize and has 83 cattle and 63 goats, a large hood of snails and a raft of ducks.

For his prize, he was given a farm tricycle, five bags of fertiliser, two sets of Wellington boots, a knapsack insecticide sprayer, five machetes and five gallons of liquid fertiliser by the Ministry of Food and Agriculture (MOFA), in addition to a king-sized bed with two pillows donated by Latex Foam Ghana.

The Volta Regional Minister, Dr Archibald Yao Letsa, who presented the items to the Regional Best Farmer, said most nations were now virtually on their knees in terms of their food security and the situation might be precarious in most parts of the world.

However, as a result of the good efforts by the gallant farmers in the country, especially in the Volta Region, Ghana was nowhere near a food crisis.

“Indeed, this region shall continue to lead in rice production as revealed by data from the Statistics, Research and Information Directorate (SRID) of the MOFA, which is an indication of the tremendous contribution of farmers from this region to the food security position of the country,” he said.

That placed the region in an enviable position in the area of value addition, such as packaging of smallholder farmer-based organisations with the product branded to depict its origin and a unique name, Dr Letsa maintained.

“Our ability to do this shall place our region on the rice global map,” he added.

The Regional Director of Agriculture, William Dzamefe, said rice, cassava and tomato production, with the appropriate packaging, held bright prospects for high incomes for farmers in the region.

Further, he said, the husk from rice could be turned into animal feed, another area of lucrative agro-based business.

Meanwhile, the Managing Director of Maphlix Trust Farms in the Ketu North Municipality, Dr Felix M. Kamassah, has been honoured as the Regional Best Crop Farmer, while a female canoe owner from Dzita in the Anloga District emerged the Regional Best Fisher.