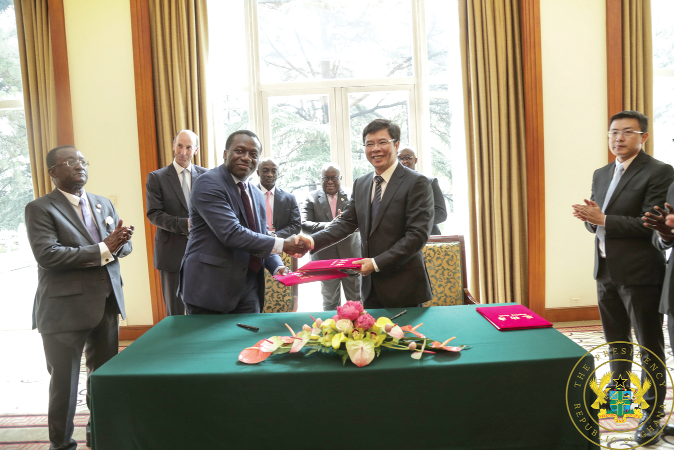 Representatives of Helios Investments and CHEC exchanging the agreement, with President Akufo-Addo and other ministers looking on
30.5k Shares

An agreement has  been signed between the Tema LNG Terminal Company Ltd and the China Harbour Engineering Company (CHEC) for the construction of a liquefied natural gas (LNG) terminal in Tema.

The project, which will generate some 1,600 jobs, is estimated to provide about two million tonnes of LNG every year.

When completed, the project, being executed at a cost of more than $350 million over the next 18 months, will supply about 30 per cent of Ghana’s total electricity generating capacity, displacing crude oil and crude derivatives as fuel sources for the generation of power.

The Director of the Tema LNG Terminal Company, Mr Ogbemi Ofuya, signed on behalf of the company, while Mr Lin Yichong, the Chairman of the China Harbour Engineering Company, signed for the Chinese company at a ceremony in Beijing, China, yesterday.

The signing ceremony was witnessed by President Nana Addo Dankwa Akufo-Addo as part of his visit to China.

As such, there is no requirement for capital from the Ghana government.

Already, a concession agreement has been signed between the Ghana Ports and Harbours Authority (GPHA) and the Tema LNG Terminal Company to allow for the siting and operation of the facility within the Tema Port.

The concession agreement is expected to deliver an annual revenue in excess of $6 million to the GPHA.

The LNG Terminal is being constructed on the back of a 12-year gas supply agreement that was executed between the Ghana National Petroleum Corporation (GNPC) and Rosneft.

Rosneft subsequently engaged the Tema LNG Terminal Company for the provision of the regasification services.

The LNG Terminal, which will be completed in 18 months, will be sub-Saharan Africa’s first regasification terminal, strengthening Ghana’s position as a regional trade and energy hub.

Speaking at the signing ceremony, President Akufo-Addo said the Tema LNG Terminal project was a testament to the efforts put in place by the government over the last 19 months to encourage private sector participation in the growth of the economy.

He said the construction of the terminal was in line with the commitment of the government to provide Ghana with constant, reliable and affordable power supply.

“If we are going to succeed in rapidly pushing the industrial development of our country, the supply of gas, which will mean even more affordable rates of power, is now a matter of very great importance for us,” he said.

The China Harbour Engineering Company, which is already involved in the ongoing Tema Port expansion project, is constructing the marine facilities, while Jiangnan Shipyard of China will construct the floating regasification facility.

The terminal will be transferred to the government (GNPC and GPHA) after 12 years.

Others were the Minister of Information designate, Mr Kojo Oppong Nkrumah, and the Chief Executive Officer of the Ghana Investment Promotion Centre, Mr Yofi Grant.