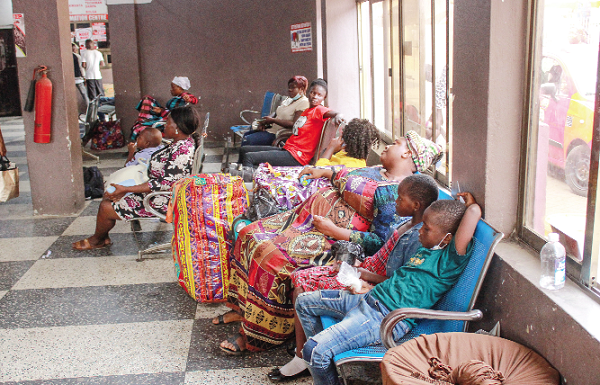 Some travellers at the Circle VIP bus terminal patiently waiting to be ushered into their respective buses. Picture: ERNEST KODZI Follow @Graphicgh

It is a day to Christmas and as usual, a lot of people are travelling to their hometowns and other destinations to celebrate the festivities with their families.

A check round some major bus terminals by the Daily Graphic yesterday in some cities showed that the rush that characterises the terminals, with long queues, shortage of vehicles and people jostling to catch a bus was absent in many of the places visited.

However, the drivers and some executive members of the transport unions and terminals were hopeful that things could pick up from today, Christmas Eve, when many people would not be at work.

Some of the long haul terminals visited include those in Takoradi, Tamale, Kumasi, Kaneshie, Madina, Tudu and the Kwame Nkrumah Interchange.

The commonest reasons cited for the low patronage were the general increase in the prices of goods and services, the expansion of the transport sector with multiples of terminals in the same vicinity, the COVID-19 pandemic and low disposable incomes.

The situation at some terminals at the Kwame Nkrumah Interchange was different as they were full of travellers.

The Operations Assistant for the STC Circle branch, Mr Osman Salifu Ahmed, said the place had been busy since the beginning of the week, as people had been travelling.

Transport operators within the Tamale metropolis also appeared to be cashing in on the Christmas season as a number of people who hailed from the southern part of the country were travelling home for the festivities.

When the Daily Graphic toured the metropolis, it observed that there was a mad rush for tickets at the various bus terminals.

While some commuters were queuing for tickets, others had thronged the terminals to send parcels and livestock to their families.

A trader, Asana Yakubu, said: "It is just like the normal season for us because we are just doing our normal business, it is not so different to me".

The Traffic Supervisor of the Metro Mass Transit, Kinbu Point, Mr Moses Agbenyo, told the Daily Graphic that there was low patronage and expressed the hope that patronage would pick up today, as it was the last day before Christmas.

The Branch Manager of Intercity STC, Tudu Branch, Mr John Anaba, said that even with COVID-19 at its height, last year’s patronage at the same period excellence and unity as we soldier on into the year 2022,” he said, adding, “May God bless our homeland Ghana and continue to make our nation great and strong”.

Apostle Nyamekye indicated that Christmas was not for recreational purposes but a season for Christians to remember the foundation of the faith, retell the redemption story and renew their commitments to Jesus Christ, the Saviour of the world.

He observed that although Christmas was celebrated globally and for centuries, the religious festivity had always come under attack with some people questioning its relevance to Christianity.

According to him, some people hated Christmas because of its Christian basis; others hated it because they felt obligated to celebrate it, while others resented the thought that Jesus was the Son of God.

He further noted that some Christians disliked church conventions and meetings organised during the Christmas season because they "disrupt" their holiday plans. While others point out that Jesus was probably not born in December and that there is no biblical suggestion about the celebration of His birth.

For his part, Rev. Prof. Frimpong-Manso prayed that the Christmas would be celebrated in moderation.

“Let us not lose focus because Christmas is not about getting drunk and wasting resources. It is about giving and forgiving (for Jesus was given to us so we could be forgiven); a time of sharing (for the wise men shared); a time to receive a prophecy (for several prophecies were fulfilled); a time of taking stock (for there was a population census); a time of safety (for the baby Jesus and the family received protection from God),” he said.

He said as Ghanaians prepared for Christmas, many things would engage their attention.

“We are in that part of the year where the doomsayers will be in their elements – prophesying doom against families and the nation. Ignore their tantrums and keep praying; for the Lord is on our side. It is an open secret that the coronavirus has decided to mutate so it could stay with us. Let us therefore be wise enough to go through the inoculation, wear our face masks and continue to observe all the protocols, within the festivities. It will be in our interest, to learn from history and happenings around us,” he said.

Rt Rev. Osabutey said the year 2021 came with it, the devastating challenges of COVID-19 that took hold of the world for the most part of 2020, and that just when the country was recovering from the social and economic challenges, news of different variants of the disease began to emerge.

“Against this background, most of us may be desperate, afraid and tempted to give up. The season of Christmas reminds us of God's gift to the world - Jesus, who is an embodiment of Peace for our troubled world. God's action was motivated by His love for humanity.

Rt Rev. Dr Ofori said Christmas was a wonderful time of the year when Christians celebrated faith, family, and the tradition of giving gifts because that was what God did.

“Peace is the absolute gift that God has given to us Ghanaians through His Son Jesus, the Christ. So let us continue to maintain the peace especially as we celebrate the birth of Jesus Christ who is the prince of peace.

“Let us remember as a nation, that, Jesus is the reason for the celebration. For this, whatever one does, it should be to the glory of His name. Let us make merry in moderation. Drivers should exhibit the highest sense of caution during this season to avoid the loss of lives.

As a nation, he said Ghanaians needed to appreciate the fact that Christmas was also a season for giving, remembering and sharing the love that God showed mankind. He would, therefore, like to call on all well-meaning citizens and philanthropists to reciprocate God’s love for mankind.

In a related development, the Ghana Journalists Association (GJA) has thanked God for lavishing his grace on all media practitioners, media owners and media consumers for the year 2021.

“The GJA proudly notes that a significant swathe of the media space has witnessed the display of distinctively distilled journalism. On the flip side, however, are ethically bankrupt practices which spell a negative image for the profession, he said.