Traders take over streets in Takoradi 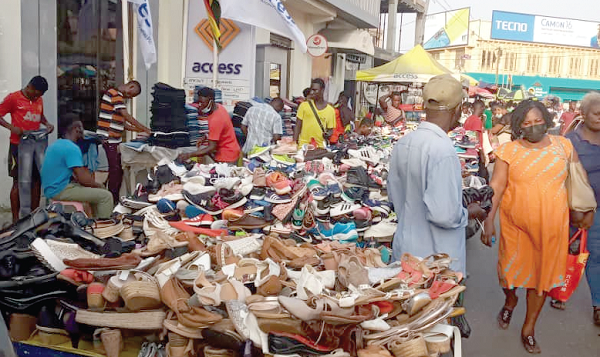 Some shoe sellers displaying their wares on trucks on the pavement
30.5k Shares

Congestion in the Central Business District of Takoradi has increased significantly as traders have turned pedestrian walkways, roads, medians, frontages of offices, banks and shops into a trading post.

This uncontrolled invasion has resulted in many unfortunate and avoidable incidents including pedestrian knockdowns and serious injuries, as visitors to the business district have to share the streets with vehicles.

The traders, who have ignored all dangers inherent in their takeover of the streets, which is against road traffic rules and poses danger to their customers and pedestrians, display their wares as if the streets are originally designated for such purposes.

The wares are displayed on tables, mobile kiosks, the bare floor and push-trucks with an umbrella to provide shade while they “harass” pedestrians by accosting those who have no intention of buying to patronise their wares.

On the median of streets and on the pedestrian crossings, traders have placed boulders to indicate their trading area and display their wares (used cloths) on metal cloth-hangers which makes it difficult for drivers to see ahead or see the road signage.

These activities cover the stretch from the STC traffic light through Collins Avenue to the market, the inner-perimeter of the round pavilion and the road towards the harbour direction.

The Old John Sarbah Road and the direction towards the Paa Grant Roundabout has also seen a sharp increase in hawking and table top trading activities, especially in front of the Market Circle Post Office, the link to the area, known as Day-By-Day Star Hotel, and from Nkrumah Roundabout to the central market.

The Daily Graphic’s long period of walk round the market revealed that aside from the hawking activities, some taxi and commercial drivers had taken advantage of the situation and were also turning every available space into a loading bay.

It is interesting that even though members of the general public complain about these invasions, other members of the public see it as bringing convenience to their shopping.

As if that is not enough, tricycles carrying wares at the market or selling bags of sachet water, rice, drinks and other consumables, mobile money vendors as well as food vendors can be seen all over the place.

The interesting thing about these tricycle riders is that they stop at will in the middle of the streets to offload large or small quantities of the wares they are carrying, creating a lot of social discomfort as vehicles in that lane have to wait for them to finish offloading.

In the midst of all these, the most vulnerable ones exposed to this unacceptable situation are schoolchildren and children of some of the traders who accompany parents or guardians to the market. It is, therefore, not surprising that a child is most of the time found in the middle of the road.

Commercial drivers, who operate from various terminals, told the Daily Graphic that the current development was dangerous. They explained that as business booms, mothers become unaware of the movement of their children as their focus shifts to the potential buyers.

One of the taxi drivers, Mr Kojo Nsiah, said “we are also focusing on our driving and looking for passengers and these tiny children cross us all the time, so if you are not careful you will run them over.”

He admitted that some of them were stressed and reckless and were also struggling to meet their daily sales, therefore, any least mistake they made, the result would be fatal. “Already we have had some knockdowns of some customers of these traders who have sustained very serious injuries,” he said.

Traders and banks said they had severally informed the managers of the city but nothing had been done about the situation. “We were hoping that the planned reconstruction would restrict the hawkers but it has rather aggravated the situation,” they said.

A trader, who pleaded anonymity, said she did not see anything wrong with where she was trading because she paid tax to the assembly.

She admitted that "unfortunately accidents have occurred here but I can't attribute it to those of us selling here because we are not the drivers.”

She said that their locations were not designated places for trading as they had permanent shops inside the market, “but we have a situation where people come from all over to this place from this and other regions to trade – therefore we have no option but to move to the street too,” she said.

The Public Relations Officer of the Sekondi-Takoradi Metropolitan Assembly (STMA), Mr John Laste, admitted that the congestion at the central market was alarming.

He, however, said most of the petty traders were given spaces during the festive season by the STMA for temporary business after which they would be moved back.

According to him, the traders were still on the pavements due to the current situation of relocating them for the redevelopment of the central market.

He expressed the hope that the current situation would be a thing of the past once they relocated the traders to the temporary sites but unfortunately others had joined in their large numbers.

The Assembly, he said, was studying the situation and would take appropriate action to sanitise the space.