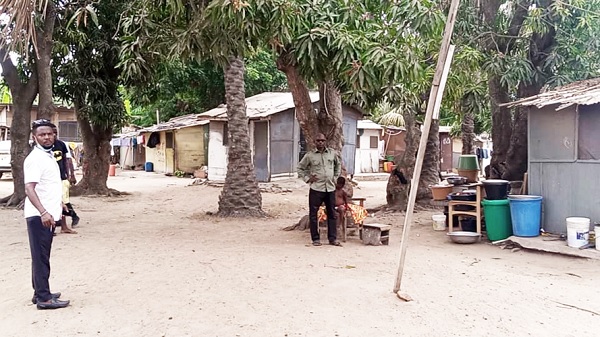 The Tema Metropolitan Assembly (TMA) has given a two-week ultimatum to squatters on the premises of the Tema General Hospital to vacate or face forceful eviction.

Although the hospital is walled, some private individuals and squatters have managed to move into the facility, encroached undeveloped lands and constructed makeshift places of residence.

The Chief Executive of the TMA, Yohane Amarh Ashitey, issued the ultimatum when he went on a tour of the facility last Tuesday.

It followed appeals from staff of the hospital who complained that the makeshift structures within the facility posed a threat to their safety.

The staff said the situation had compromised security at the hospital, especially at the quarters where health personnel resided.

Indeed, some of the squatters have found home on the hospital’s premises as a solution to their accommodation problems.

Others, who were employed as casual workers of the hospital, over time put up structures which they now call home on the blind side of the hospital management.

One of the squatters, who gave his name as Paul, said he was initially engaged as a casual employee by the hospital and had his contract renewed on each expiry, but his service was eventually terminated after more than 10 years without any benefits paid to him.

He said he had already put up a structure for his family there so they decided to stay on.

Other squatters also explained that they were having challenges securing accommodation in town so they moved in to join friends and relations who already had makeshift structures around the undeveloped lands within the hospital premises.

During his tour, Mr Ashitey expressed regret about the level of encroachment within the facility and indicated that the TMA would enforce every available regulation to remove the unauthorised structures.

He indicated that apart from ejecting the squatters from the Tema General Hospital, the TMA would go ahead with its planned demolition exercise of illegal structures dotted along the highway spanning the Tema Harbour roundabout to the Tema Motorway intersection, expected to affect over 500 structures.

He said the assembly would also move into the various communities to demolish illegal structures at unapproved places.

Mr Ashitey later told the Daily Graphic that the TMA would not countenance illegality and would ensure that the rule of law prevailed in the metropolis at all times.

“If we are to make Tema shine again, then we must make sure discipline and rule of law prevails and is working to help us change the face of the metropolis,” he said.

In a related development, the TMA has asked traders operating on the Twedaase Junior High School park at Tema Community One — created to cater for the exigences brought on by COVID-19 — to relocate to the main Community One Market within two weeks.