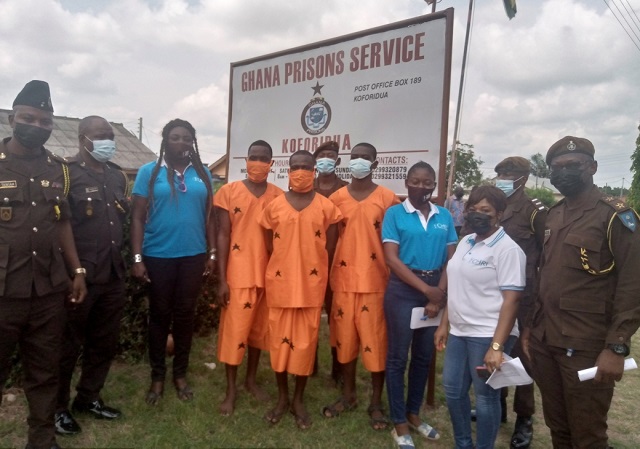 The Commonwealth Human Rights International (CHRI) has freed three convicts at the Koforidua Prison in the New Juaben North Municipality of the Eastern Region after paying their fines on Monday, May 31, 2021.

The CHRI paid a total sum of GH¢2,750.00 for the release of the three, who were convicted for minor offences such as petty theft and failure to report an accident early on this year.

The three convicts; 18-year old Isaac Adu, Henry Ebenezer Richard Akornor, 20, and Samuel Larweh, 27 were beneficiaries of the CHRI’s initiative to assist convicts in the category of petty offences in various prisons across the country.

The Africa Office Director of CHRI, Ms Mina Mensah in an interview with the media said the initiative is part of their project to decongest the prisons especially in the wake of the coronavirus (COVID-19) pandemic.

“We have undertaken this project as part of the initiative to decongest our prisons that are very much over populated, in order to also curb the spread of the COVID-19 in some of these facilities. Some of the convicts actually never deserved to be here not because they did no wrong but because the custodial sentences were severe,” she said.

She said the application of custodial sentences for minor offences in the country should be looked at as it attempts to criminalise poverty, pointing to the fact that most of the culprits in the petty offence bracket fell victim due to poverty.

She appealed to government to reconsider the custodial sentences attached to petty theft to decongest the prisons, and lessen the burden on government in taking care of prisoners.

The Commander of the Koforidua Prisons, Deputy Director of Prisons (DDP) Kwaku Ababio Ali expressed gratitude to CHIR and appealed to other Non-Governmental Organisations (NGOs), corporate organisations and well-to-do Ghanaians to emulate the example to help decongest the prisons in Ghana.

He also cautioned the general public to be very circumspect with their behaviours as one bad turn can needlessly take away their freedom, and also putting pressure on the facilities at various prisons in the country.

The convicted teenager, Isaac Adu in an interview said he was convicted on May 21, this year due to his failure to report a commercial motorcycle (Okada) rider involved in an accident in which he was a passenger at Asuom in the Kwaebibirem Municipality of the Eastern Region.
He defaulted in paying a fine sum of GHS 1,200 and was therefore serving nine months in jail.

Henry Ebenezer Richard Akornor, and Samuel Larweh from Asuom in the Kwaebibirem Municipality and Somanya in the Yilo Krobo District respectively, were convicted for petty theft.

Henry Akornor, 27, defaulted to pay a fine of GH¢600 for transferring a sum of GHS 800 from his biological sister’s mobile money (Momo) wallet to his, and was to serve eight months in jail from February this year.

However, he served three months of his jail term which would have terminated in October this year, and has therefore seen his fine reduced to GH¢350 from the initial GH¢600.

Meanwhile, 20-year old Samuel Larweh also defaulted to pay his GH¢1,200 fine for stealing a sum of GH¢1,700 from his boss to pay medical bills for his sick mother in April this year. He was to serve nine months in jail.