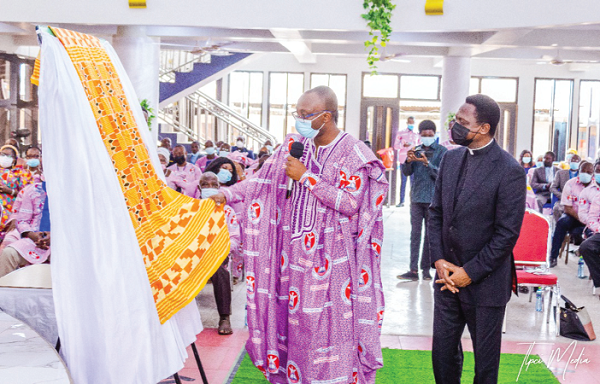 The Lord’s Pentecostal Church International (TLPCI) has launched its 60th anniversary celebration with a call on Christians to exhibit the true character of Jesus Christ wherever they find themselves.

The Chairman of the Church of Pentecost, Apostle Eric Nyamekye, who made the call, noted that "people should be able to smell Heaven around you just by your presence because we are the aroma of Christ".

"Just by your presence, people who are sinning should be able to hide because the light is shining and they are naked so they want to go and clothe themselves.

"This morning I challenge you that wherever you work ...people should see that light has come so that because of you they too would have the light of life," he said in his sermon at TLPCI's 60th anniversary launch last Saturday in Accra.

Speaking on the theme:"Let Your Light Shine", which happens to be the anniversary, Apostle Nyamekye paid glowing tribute to the present and previous leaders of the Church for steering it through the 60-year period.

Apostle Nyamekye, who jointly unveiled the 60th anniversary logo of TLPCI with the General Overseer, Apostle Eric Essandoh Anim Otoo, said, among other things, that in the Church was Jesus Christ and His word and the power of the Holy Ghost that transformed the lives of people.

"So anytime we gather we look for the word and the power of the spirit to transform us so that we can impact our spheres," he emphasised.

Quoting from Matthew Chapter 5:4-16, among other scriptures, the Chairman of the Church of Pentecost said the light that the disciples or Christians had was a borrowed light meant for a particular purpose.

"Now, if it is a borrowed thing then you must hold it with your two hands. He Jesus is the real light, John 1:4 and 5 says this.

In Him was life and the life was the light of all mankind," he said.

Quoting further in John 8:12, Apostle Nyamekye explained that Jesus was the true light of the world and that whoever that followed Him would not walk in darkness but would have light of life.

He said once people received Jesus, His life came into them and that life was a light on to the world.

"Don't hide your light in a bowl, lift it so that it can benefit most people.

But remember that as long as He was in the world, He was determined to be the light of the world.

Before He left, He gave the disciples the light and the life," he said.

Apostle Nyamekye indicated that it was "not enough to have many of us saying that we are born again and so what, your light must shine.

What benefits are you bringing to the earth, how are you representing Jesus?"

He said unless churches were prepared to deal with the flesh, the world and Ghana would continue to be in darkness.

He said the light was for the benefit of the unbelieving world and that behind that was eternal life.

"I believe we can change this nation when we change the messages from the pulpit.

So once we start changing from here, we world change the pew and we would change this nation," he said.

Apostle Otoo, who launched the 60th anniversary celebrations, saluted the founding fathers of the church.

The year-long anniversary expected to be climaxed in October next year would be held with a series of activities, including seminars, fasting and prayer sessions, conventions, donations to schools and hospitals, fun games, health walk, tree planting and clean up exercises.

"When Rebecca was 60 she gave birth to twins, Jacob and Esau.

So, during our 60th anniversary celebration, we are believing God for double blessings in every area of our lives," he said.