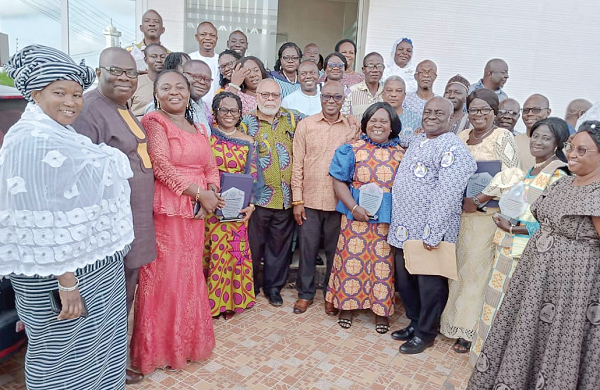 The Teachers and Educational Workers’ Union (TEWU) of TUC Ghana has honoured 27 past national officers for their dedication and sacrifices in promoting the growth of the union, as well as consolidating the gains the union has made over the years.

The awardees were made up of 12 females and 15 males. They were presented with citations in addition to cash donations.

The rest of the recipients were members of the National Executive Council (NEC); Finance Committee and TEWU Fund Board of Trustees.


All the recipients were those who had worked at the very top of the union, that is the National Executive Council, which included national officers, Women’s and Finance committees.

They were not necessarily people who had retired from active service, but persons who had served their tenure in a given position.

The union periodically brings on board all these people and show appreciation in the form of an awards ceremony.

In his remarks, the General Secretary of TEWU of TUC Ghana, Mark Dankyira Korankye said, “We are saluting all our gallant leaders and telling them that we appreciate everything they sacrificed for this union and we pray that God will continue to guide them, so that they will be a source of inspiration for the younger generation.

“We have had people sacrificing for the life of this union. Some even to the extent of putting their jobs on the line, because always as union leaders you are being targeted, so some were denied their promotions because they had to stand in as union leaders,” he emphasised.

The Chairman of TEWU of TUC Ghana, Ambrose Yao Kwadzodza, commended the past officers who served the union selflessly.

“We are asking every young personality to be committed to the cause of their union. At any position that you are going to serve under a union, you make a pledge to the people who put you there, so it is our desire to get every young person to serve their unions with hearts and not their personal interests so that their members will be served well,” he said.

On behalf of the recipients, the immediate-past Chairman of TEWU, Peter K. Lumor, urged people aspiring for union leadership to be mentored and study under experienced people.

“We thank God that we the awardees are alive and have been honoured for the services we rendered to TEWU of TUC Ghana. We know that these days things are difficult, but TEWU of TUC Ghana will overcome. I wish to encourage those coming after us to exercise the patience to learn, they should be prepared to be mentored,” he said.