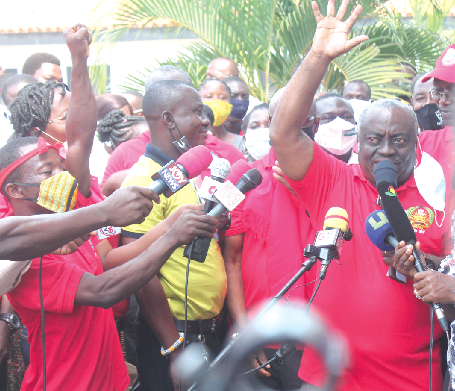 The Teachers and Educational Workers Union (TEWU) yesterday began an indefinite nationwide strike to demand better conditions of service for its members.

However, members of the union working in the security, payroll and hospital departments have been excluded from the strike.

The union has also discharged a taskforce to every campus to ensure that members who are not within the aforementioned categories comply with the strike.

Addressing hundreds of aggrieved TEWU members at the University of Ghana yesterday, the General Secretary of TEWU, Mr Mark Korankyi, said the conditions of service, which expired in 2010, had not been renewed, a development which had negatively affected the members, reports Justice Agbenorsi.

He decried the “consistent discrimination” against members of TEWU, and added: “We have come to the point where we can no longer bear our frustration.”

“The feet dragging and delay is becoming too much for us and until the government sits with us to revise the conditions of service and attend to us, we are going to lay down our tools,” he said.

Mr Korankyi noted that despite engaging the relevant authorities, such as the Fair Wages and Salaries Commission since 2019 and the Presidency, the needs of the union had still not been addressed.

“We feel we are not being treated fairly, and we think that the government must take us seriously,” Mr Korankyi added.

He said the roles of TEWU members in the various universities were as crucial to teaching and learning as those of lecturers.

“The labourer on the ground is also ensuring that students and lecturers live in a clean and healthy environment for teaching and learning to go on, so if you think that it is the lecturers who matter, I am afraid you are making a mistake,” he said.

He said since June 2019, the leadership of TEWU had  been at the negotiating table but nothing positive had come out of the meetings.

“We can no longer continue to work under the old conditions of service,” he explained.

Reacting to the potential impact of the strike on students, Mr Korankyi explained that their children were also students in various public universities, hence the need for the welfare needs of their members to be attended to.

From Kumasi, Kwadwo Baffoe Donkor reports that with the exception of security and health workers, all other members of the TEWU of the Kwame Nkrumah University of Science and Technology (KNUST) laid down their tools in compliance with the directive by the mother union.

The Local Union Chairman, Mr Charles Arthur, told the Daily Graphic that until their demands were met, they were not returning to work.

He said the union had exempted the security and health workers from the strike due to the “critical nature of the services they provide”.

“All other members have been asked not to report to work until further notice,” he said.

Checks at the Akenten Appiah-Menka University for Skills Training and Entrepreneurial Development (AA-USTED), however, indicated the opposite.

According to the University Relations Office, all members of the local TEWU were at post.

The university, which reopened last Monday, is currently organising an orientation for fresh students.

The Kumasi Technical University (KsTU) too is not experiencing any disruption of activities on the campus.

According to the University Relations Officer, Dr Charles Obeng Sarpong, the members of the technical universities belonged to a different union and  were not part of TEWU.

Mary Anane Amponsah writes from Ho that members TEWU at the Ho Technical University (HTU) have joined the nationwide strike.

When the Daily Graphic visited the campus, there were no lecturers.

Some few students were seen on the campus, while others were said to be in their various hostels.

A Level 300 student studying Agricultural Engineering, Mr Mark Makafui, said: "School has been quiet today because students and lecturers have not reported.”

From Bolgatanga, Vincent Amenuveve reports that the leadership of TEWU in the Upper East Region has appealed to the government to call members of the union to the negotiating table to resolve issues of their remuneration immediately.

The Regional Vice-Chairman of TEWU, Mr Elias Ayinbila Apasiya, pointed out that for the past 12 years, the demands of TEWU members had not been met.

The Local TEWU Chairman of the C.K. Tedam University of Technology and Applied Sciences(CKT-UTAS), Mr Samuel Ayuu Ayitio, indicated that the leadership of the local union met with the management of the university earlier to inform the management about the strike.

He said the regional executives of TEWU had also met with local union members on campus to explain to them the reason for the action.

In Tamale, the members of TEWU at the University for Development Studies (UDS), Tamale Campus, with red strips of cloth tied to their heads and hands, converged in front of the Central Administration around  9:30 a.m. yesterday, writes Fredrick Daoyenikye.

The branch chairman, who doubles as the Northern Regional Chairman of TEWU, Mr Sulemana Abdul-Rahaman, indicated that all members of the union across the region were taking part in the strike to prompt the government to renew their conditions of service.