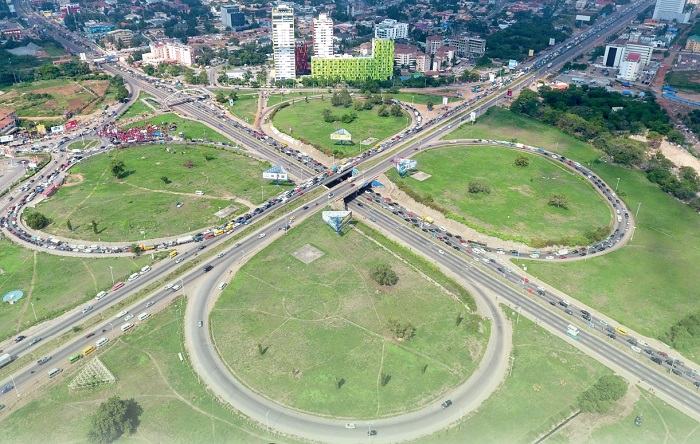 The Tetteh Quarshie Interchange is a cloverleaf interchange carrying a six-lane Tema motorway that links the Liberation Road from 37 Military Hospital to the Legon road through Adenta in the Greater Accra Region, Ghana.

The interchange was constructed to replace the largest roundabout in Ghana to ease vehicular traffic at the intersection of two highways in the country.

The N4 begins at the Tetteh Quarshie Interchange and runs through Legon, Adenta in the Greater Accra Region, and continues through Aburi, Koforidua, and Asokore in the Eastern Region to join the N6, which continues to Kumasi in the Ashanti Region.

The N1, on the other hand, begins at the border with La Cote d’Ivoire at Elubo and runs through Sekondi-Takoradi, Cape Coast, Winneba, Accra and Tema to the border with Togo at Aflao.

The Government of Ghana, in 2003, initiated moves to expand the Tetteh Quarshie roundabout which used to be the largest in Ghana. The project was to restructure it into an interchange to handle the huge vehicular traffic at the intersection.

Former President John Agyekum Kufuor on January 17, 2003, cut the sod for the commencement of the project. After two years, the project, which was executed by Messrs. SONITRA-RCCN Joint Ventures, was opened to vehicular traffic on February 27, 2005.

The interchange, which is one of the largest in the country was the second to be constructed in Ghana, after the Sankara Roundabout (now Ako Adjei Interchange). It was named after a renowned agriculturalist, Tetteh Quarshie, who helped introduce the cocoa crop to Ghana on a large-scale.

A Cloverleaf Interchange is a junction of two highways, one crossing over the other, having a series of exit and entrance ramps, arranged in the form of a four-leaf clover, such that traffic may proceed from either highways in all directions.

The Tetteh Quarshie Interchange includes a bridge on the motorways, three-lane dual carriageway, four loops and four slip roads to ease the movement onto the flyover.

Most of the vehicular traffic from the various roads that feed into the interchange are from the Eastern, Western and Southern parts.