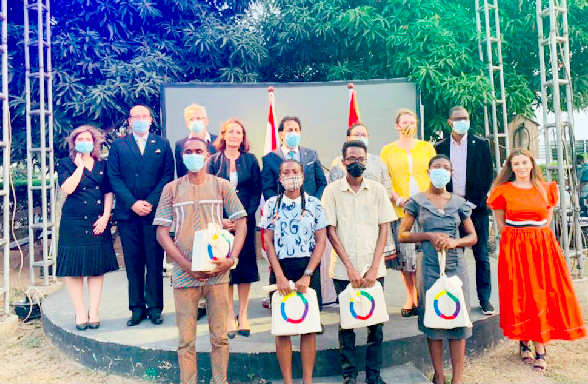 • The award winners with members of the Lebanese community in Ghana
30.5k Shares

A literary academic contest, “The Young Francophone Writers Competition”, has been held by the Lebanon Embassy in Accra to encourage a culture of reading and writing among students and talented writers within the Francophone community in Ghana.

Gideon Afful, a national service person at the Ministry of Foreign Affairs, claimed the second position with his novel, “La Dance Sur Un Volcan”, while Maurice Djojo Adjetey, a student of the University of Ghana, had the third prize with his novel, “La Prochaine Fois”.

The winners received certificates of recognition, mobile phones, tablets and  collections of books from renowned French writers. All other participants received gifts.

The competition was launched by the Lebanon Ambassador in Accra, Mr Maher Kheir, who said it was meant to discover young talented writers who could become major contributors to the growth of the French language around the world.

“Writing makes the impossible possible. To write is to cross the thorny path that leads to the peaceful pink shores. Only writing makes the mirage tangible and turns invisible tears into a readable dawn,” he noted.

He stated that the French language “is rich in history and hope, rich in civilisation, literature, philosophy, poetry and power of existence”.

Mr Kheir urged the winners to uphold the values of truth, justice and peace, saying they were necessary for society’s progress.

“I congratulate the winners who take their first step towards a new world where truth is the muse, where justice is the crown, and where peace is the throne of the kingdom,” he added.

The competition climaxed this year’s Francophonie Week celebration, the launch of which was attended by the Ambassadors of France, Mexico, Canada and Morocco, as well as the Advisor for Co-operation and Cultural Action at the French embassy, Mr Alexandre Foulon, and the Director of Alliance Francaise, Mr Emmanuel Labrande.

The International Day of la Francophonie is celebrated across the world on March 20 every year to offer a platform to meet and develop partnerships among the francophone communities.

In Ghana, the francophone embassies, along with Alliance Française, organise various events during the week to celebrate cultural and linguistic diversity.

The week-long event is characterised by concerts, film shows, workshops, competition in French, meet-up with authors and children’s performances.

Lebanon is a founding member of the International Organisation of Francophonie (IOF), and has actively played a key role in the organisation since 1973.

In 2002, Lebanon hosted the ninth Summit of Heads of State and Government of countries using French as a common language in its capital, Beirut.

Ghana has, since 2006, been handed the status of associate member of the IOF.