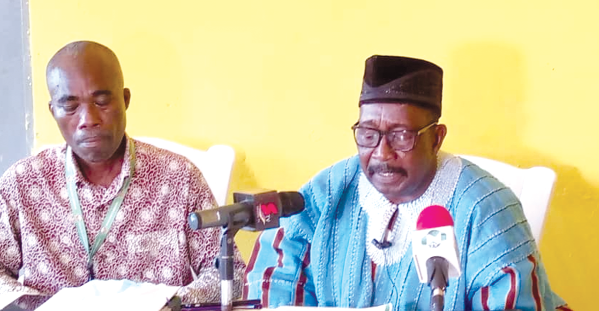 The Northern Regional Lands Commission has denied that it has sold the timber market in Tamale to a private developer while those occupying the land have been served with notice to vacate it.

Addressing a press conference in Tamale last Thursday, the Northern Regional Chairman of the Lands Commission, Mr Dubik Mahama Yakubu, explained that the timber market was state land that was covered by a planned layout and people who did business there had been on the land for several years without paying anything to the state.

He explained further that what the commission had requested those occupying the land to do was for them to regularise their stay by applying for leases to cover their holdings to provide them with security of tenure and that idea was mooted last year but preliminary discussions did not go far with their leadership.

The press conference was in reaction to a statement by the Minority Leader and Member of Parliament (MP) for Tamale South, Mr Haruna Iddrisu, that the timber market land in Tamale had been sold by the Lands Commission and those occupying the land had been served notice to vacate during an interaction with some of his constituents last Saturday.

The claims by the Minority Leader, according to Mr Yakubu, were broadcast on Joy News on May 1, 2021, and also published on myjoyonline the same day.

No sale of lands

The Northern Regional Chairman of the Lands Commission also denied the allegations by a group calling itself Coalition of Citizens of Tamale that the commission was also disposing of public lands in Tamale indiscriminately.

He said the commission, as a constitutional body, existed to, among other things, manage public lands and anything he, as the chairman, had done, since they were inaugurated in August 2017, was in accordance with the law.

Mr Yakubu re-emphasised that the Lands Commission did not sell state lands but lease them to developers for the benefit of society.

“I wish to emphasise that anybody or organisation which does not acquire state land through the lands commission will never be granted any title because this is an illegality that should not be condoned”, he stated

He, therefore, urged those peddling that falsehood that the commission was selling government lands indiscriminately in Tamale to private developers to desist from those acts since that was undermining the peace and stability of Tamale.

Mr Yakubu said the commission, under his administration, had been instructed to decentralise and set up the lands administration in Damongo and Nalerigu, the regional capitals of the Savannah and North East regions and was, therefore, liaising with the chiefs, opinion leaders and all stakeholders in those two regions to ensure peaceful and orderly transfer of files in furtherance to the creation of the respective lands Commission administration.

He used the opportunity to thank the Overlords of Dagbon, Goma, Mamprugu and Nanum Kingdoms and their elders for their unflinching support for the Lands Commission in their respective areas.