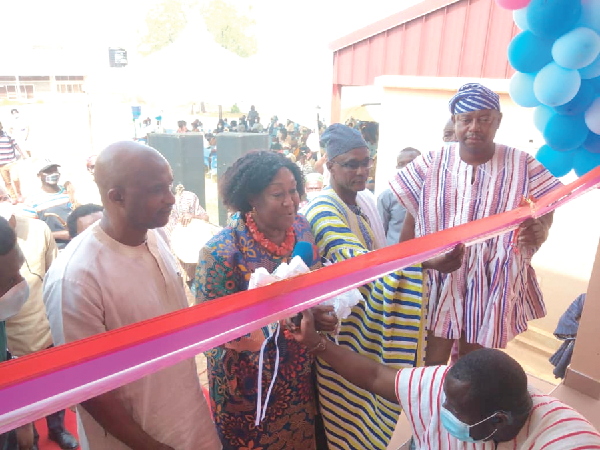 Dr Mokowa Blay Adu-Gyamfi (2nd from left), the Presidential Advisor on HIV/AIDS, cutting the tape to inaugurate the centre. Assisting her include Mr Sule Salifu (right), MCE of the TaMA, and Dr Mahmoud H. Nassir-Deen (left), the Board Chair of the TTH. Follow @Graphicgh

A GH¢600,000 cancer treatment centre has been inaugurated at the Tamale Teaching Hospital (TTH) to serve patients in the Northern, North East and Savannah regions and neighbouring areas.

Constructed by the Roche Group, a pharmaceutical and diagnostics company, with support from the World Child Cancer, the centre would also create awareness and conduct periodic cancer screening exercises among other services.

At the inauguration of the facility, the Country Manager of the Roche Group, Dr Philip Anderson, said the TTH centre was one of three facilities established in the country by the company to provide cancer treatment to patients.

“Access to quality healthcare for cancer patients, most especially in this part of the country, is a major concern to Roche, hence our partnership with the government to improve access for better healthcare to cancer patients,” he said.

He indicated that some health personnel at the hospital had undergone training in cancer surveillance and diagnostics to enable them to operate the facility effectively.

The Board Chairman of the TTH, Dr Mahmoud H. Nassir-Deen, for his part thanked the two organisations for putting up the centre to provide quality health care for cancer patients.

He indicated that the hospital recorded 55 breast cancer cases in 2021 as against 35 cases recorded in 2019, which called for more efforts to tackle cancer.

Dr Nassir-Deen appealed to the government to continue the phase three of the hospital's expansion project which included the construction of paediatric block, a psychiatric department and a centralised storage facility to put the hospital in a better position to provide adequate service delivery to the people.

He also appealed to the government to provide accommodation facilities for relatives who visit the hospital to take care of their patients while they were on admission.

The First Lady, Mrs Rebecca Akufo-Addo, in a speech read on her behalf, reiterated the need for Ghana to pay more attention to the health needs of women and children, saying they remained vulnerable in many areas, especially in healthcare.