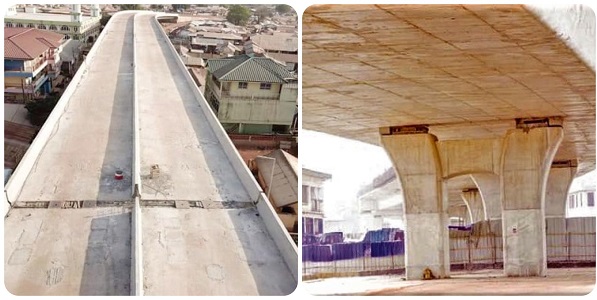 The Ministry of Roads and Highways has given an assurance that the Tamale Interchange project has been undertaken in accordance with the standards and specifications of the ministry.

It explained that the bridge had been designed to a 100-year life, adding that, the design went through a rigorous process of approval before implementation.

The ministry’s assurance was contained in a press release issued by its Public Affairs Unit in response to comments made by the Minority Leader and Member of Parliament (MP) for Tamale South, Mr Haruna Iddrisu, on the Tamale Interchange.

A few days ago, the Minority Leader called for a structural audit of the performance of the contractor constructing the Tamale Interchange to guarantee and ensure value for money.

He also called on the Supervising Consultant, the Ministry of Roads and Highway, and the Department of Urban Roads to ensure that the audit was done.

Mr Iddrisu, who was speaking on behalf of the four MPs from the area after a tour of the project, said they were particularly concerned about the roundabout at the Tamale Central Mosque which was so wide, thereby narrowing the road.

The ministry explained that the interchange had been constructed to segregate arterial traffic from the local traffic, which used the ground level.

It said the existing road between the Central Mosque and the Taxi Rank used to be a two-lane 6.5-metre road.

However, that had been upgraded to a two-lane 14m interchange on the second tier with a slip road of five metres on the ground level, thereby significantly improving the capacity of the road.

The ministry explained that the roundabout at the Central Mosque had a roadway width of six metres and a diameter of 22 metres and it had been designed to the ministry’s standards.

On the demolition of structures, the statement explained that as far as the project was concerned, all the spaces required to construct the interchange had been acquired and compensated for and that the project did not need any additional space nor demolition of any other structures.

Providing details about the interchange project, the statement said it had a total bridge and ramp length of 1072m.

The bridge, it added, was a continuous concrete bridge which was different from the other simply supported bridges in the past that had a lot of expansion joints which reduced the driving comfort of motorists.

“It is a pre-stressed concrete box girder that is very efficient for curves on the bridge with high torsional resistance,” it explained.

The statement said it had become necessary to provide the clarification in order to assure the people of Tamale and Ghanaians that the interchange was structurally sound, intended for its purpose and would improve traffic flow in the Central Business District of Tamale and by extension, the country.

“The ministry assures all Ghanaians that the necessary steps have been taken to ensure the bridge’s stability and value for money,” it added.

The ministry also said it had appointed an independent supervision consultant to superintend the execution of the works.

“All tests conducted during construction have proven to be above the required specifications,” the statement said.