Takoradi harbour to get new shipyard 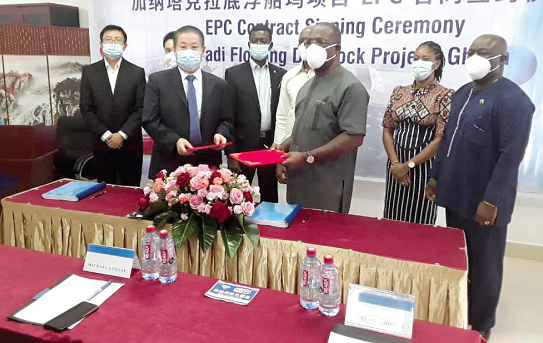 •Mr Stanley Raja Ahorlu (right) and Mr Tom Yang exchanging documents after signing the agreement . With them are other management members of PMD and CHEC
30.5k Shares

An Engineering, Procurement and Construction (EPC) agreement between PMD AssetCo Limited and the China Harbour Engineering Company Limited (CHEC) is to give birth to the construction of a new shipyard that is set to begin in March this year at the Takoradi Port.

PMD are the project developers while CHEC will be in charge of the civil construction works on the facility which is estimated to cost $49 million.

The project will be the first private shipyard in the country and is expected to be completed in 18 months.

Speaking at the signing ceremony, the Managing Director of PMD AssetCo, Mr Stanley Raja Korshie Ahorlu, said when the shipyard was completed and fully operational it would employ about 1,000 people and make the Takoradi Port the preferred port in West Africa.

Mr Ahorlu explained that though the concession was obtained in 2014, the project had to wait till now to take off due to the funding required, saying the entire project was estimated to cost $110 million.

“We obtained a concession from the GPHA for the project in 2014 but this kind of project requires lots of money which we could not obtain locally. Under the circumstances, the project was developed up to a point which aroused the interest of some international finance houses,” he explained.

“When the $110 million is deployed, it will get us a 40,000 square metre of land area in Takoradi. We will build workshops and build a jetty of about 200 metres and a 200 metre floating dock. The agreement we have signed today is for the civil works and construction.

“CHEC will be in charge of all the civil works required for the facility and it will take 18 months to finish,” he said.

The Managing Director of PMD AssetCo said the project would have a significant impact on the economy, as it would improve the transport sector’s contribution to the country’s GDP.

“The market is looking for a world-class facility within West Africa to address the needs of ship owners, especially in an era where almost every African country in the Gulf of Guinea is either developing or exploring for oil and gas.

“The GPHA has positioned the Takoradi Port as an oil and gas services hub and for that it needs all the relevant facilities which include a shipyard,” he said.

The Director General of the GPHA, Mr Michael Luguje, who was present at the signing, said the project would bring enormous benefits to the country.

He said the project would help expand the country’s shipping infrastructure and capacity.

“This state-of-the-art ship repair yard in the Western Region will not only serve commercial shipping lines but the oil and gas sector as well. It is not just a ship repair yard that is being built but also oil rigs and everything offshore.

“ Our interest is to serve the shipping community and so we consider the proposal of any investor that comes in and if it is suitable and ties into our objective, we negotiate and give it the concession and that is what we have done with PDM,” he explained.

Speaking on behalf of CHEC, Mr Yang Tao, a representative, said the company had a good track record in the country and was therefore confident of meeting the 18 months deadline it had been given.

“We have the equipment, experience and a good track record and we are therefore confident of completing it within the time frame,” he said.