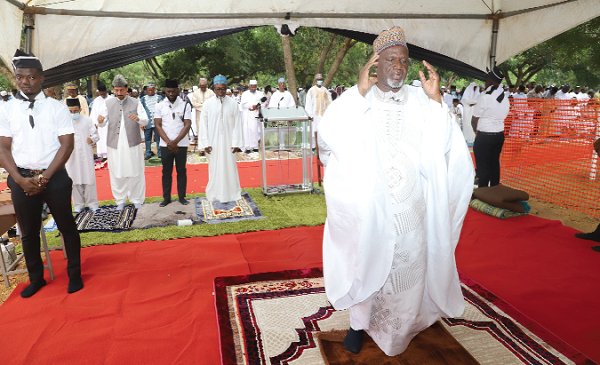 The Ameer and Missionary in charge of the Ahmadiyya Muslim Mission, Ghana, Alhaji Maulvi Mohammed Bin Salih, has urged the government to be bold and take tough decisions to address the economic challenges facing the country.

He said the time had come to do away with pretensions and parochial interests and concentrate on addressing the ills of the country.

At the celebration of the Eid-ul-Adha at Ashongman in Accra last Saturday, Maulvi Bin Salih said: “The Quran draws the attention of persons in authority to a cardinal duty that no citizen under those in authority should under whatever circumstances be left to go hungry or to go naked without clothing.”

The Ameer further stated that the founding fathers of the country made numerous sacrifices to leave behind a formidable country, and those who inherited them had a duty to build on what was achieved.

“They (founding fathers) also prayed for peace while appreciating the fact that a hungry man is an angry man,” he added.

“This is the needed patriotic course which leadership of this country must pursue because it helps to open pretentiously blinded eyes to the realities on the ground. It potentially helps in the development of sympathy towards the plight of the suffering masses,” he stated.

“This is the reality that can make a case for us to be rather selfless and God-fearing in our approach to patriotic governance,” he added.

The Ameer said role differentiation in nation-building was an important issue that all must uphold.

“If our country Ghana had embarked on this tangent, we would have efficiently promoted massive economic growth and would have lowered prices of goods and services, making them more affordable especially for the lower-income households,” he said.

While explaining that Islam sought to build a worldwide society in which peace and unity were a major focus, he said, the Hajj constituted an important religious practice which carried with it massive benefits.

“The Hajj provides a comparative advantage to all participants in as much as it helps to create multiple contact lines among people of different lands and cultures,” he said.

Maulvi Bin Salih said the Hajj was a globalisation drive that demonstrated the true nature of humanity.

He further stated that the Hajj linked mankind in a way that allowed local happenings to be shaped by events occurring many miles away.

“Conclusively, therefore, the Hajj rites bring about a transformation in the organisation of social linkages,” the Ameer said.

In the context of Islam, the Ameer said globalisation had brought people together even during trying times.

“Islamic concept of globalisation connects people in such a way that we become aware of the sufferings and the other challenges that are prevalent among brethren.

“This is the very indispensable approach which has eluded us as a nation and brought us to this critical point in the life of our country,” he said.