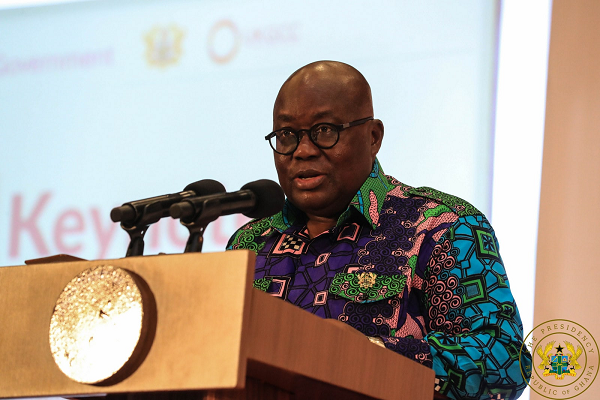 President Nana Addo Dankwa Akufo-Addo has charged Ghanaian enterprises to take advantage of the opportunities offered by the African Continental Free Trade Area (AfCFTA) agreement, which comes into force in January 2021, to expand their reach and contribute to Ghana’s development.

“We in Ghana cannot afford to let this window of opportunity slip. It is our hope that the private sector, facilitated and actively supported by the government, will be at the forefront to take advantage of the vast possibilities presented by the AfCFTA,” he said.

President Akufo-Addo said this when he opened the Second National Conference on AfCFTA in Accra yesterday.

It is on the theme: “Empowering Ghanaian businesses to harness the benefits of AfCFTA under the framework of the National Export Development Strategy (NEDS)”.

The two-day conference has the objective of bringing relevant stakeholders from the private and the public sectors of Ghana together to discuss the government’s export development interventions which are aimed at empowering the private sector to harness the benefits of AfCFTA.

The AfCFTA has its headquarters in Accra and the agreement will come into force in January 2021.

President Akufo-Addo told the conference that trading would be duty-free and quota-free among member states of AfCFTA on the continent.

He said many African countries, including Ghana, were endowed with resources that were in abundance but the countries had not been able to translate the resources into the much-needed growth and development they desired, leaving their economies in a fragile and unfulfilled state.

He said to take advantage of the opportunities, his administration had, since 2017, implemented various innovative and strategic interventions to promote and expand production, as well as add value to what was produced.

Among some of the innovative strategies, he said, were the One-district One-factory (1D1F) initiative and the development of new strategic anchor industries, such as garment, textile, pharmaceuticals and automobile assemblying plants and component manufacturing.

Others were Planting for Food and Jobs, Planting for Export and Rural Development (PERD) and the establishment 67 business resource centres, 31 technology solution centres and the development of industrial parks and special economic zones.

He said all the initiatives were geared towards developing a robust and resilient macro-economy that would build a strong foundation for the structural transformation of the Ghanaian economy.

The President said he had called attention to the programmes and projects to reiterate the point that Ghana had already laid the building blocks for its private sector to exploit the inherent benefits of AfCFTA.

He reaffirmed the government’s determination to assist Ghanaian businesses to take full advantage of AfCFTA and ensure that the required financial and human resources were mobilised and developed to make Ghana a new manufacturing hub and financial services centre for the African continent.

He was confident that with the collective desire for shared prosperity, the AfCFTA would succeed and generate a new impetus and dynamism for the rapid growth of the economies in Africa, as well as deepen the processes of integration of the continent.

“Empowered Ghanaian enterprises should be frontline actors of this new, exciting journey into Africa’s economic recovery. We owe it to generations unborn to ensure that the biggest trading bloc on the globe, whose outcomes will be rewarding to all Africans and which will assist in attaining the Africa we want, does not falter,” President Akufo-Addo added.

The Secretary General of AfCFTA, Mr Wamkele Mene, commended President Akufo-Addo for the remarkable support he had offered the secretariat.

He saluted the President for the two-prong approach he had instituted — fighting COVID-19 and continuing with the integration of markets in Africa.

He said he shared in President Akufo-Addo’s vision of setting Africa free from the shackles of the colonial economic model and his commitment to make Ghana the trade and diplomatic capital of Africa.

Mr Mene said one of the biggest constraints to trade among Africans was the cost of transaction caused by the conversion of the United States dollar into various local currencies, which led to sustained fragmentations in trade.