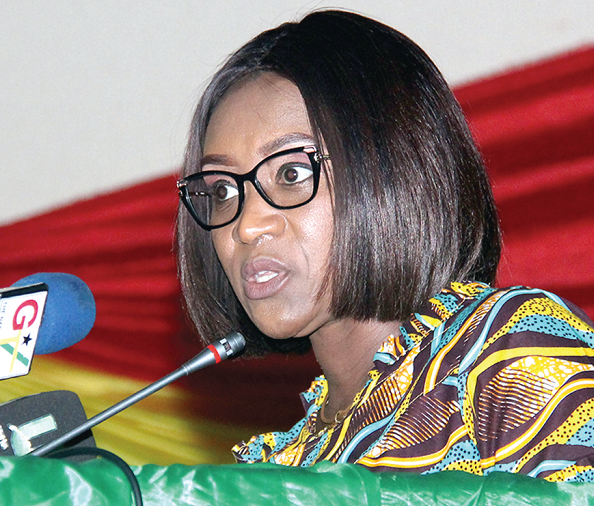 A deputy Minister of Finance, Abena Osei- Asare, has asked the Auditor-General (A-G) to provide an update of actions taken to address irregularities reported in previous audit reports.

The minister also urged the A-G to name, shame and surcharge persons who misappropriated public funds to serve as a deterrent, saying such a measure would help gain public confidence in the work of the Audit Service.

"I also wish to encourage the AG to exercise his power of disallowance and surcharge any item of expenditure which is found to be contrary to law, as indicated in article 187 (7b) of the 1992 constitution of Ghana," she added.

Mrs Osei-Asare gave the charge at the launch of the 2021 Financial Year Audits in Accra yesterday on the theme: “Ensuring fiscal stability through revenue collection and accounting — The role of the state auditor”.

The minister called for more public education on the work of the service, including explaining technicalities contained in its reports.

She said the education must particularly centre on summary of audit irregularities, especially as captured in the 2020 A-G’s report on the accounts of ministries, departments and agencies (MDAs) which contained irregularities of some GH¢12 billion.

Mrs Osei-Asare said the provision of significant budgetary support to the A-G’s office was a manifestation of the government’s determination to fight corruption.

The minister added that the government was also working towards strengthening the Internal Audit Agency and the various audit committees of public institutions to perform their oversight roles effectively.

"This will improve internal controls in the use of public funds by ensuring the implementation of recommendations contained in audit reports, in accordance with the Public Financial Management Act, 2016 (Act 921) and Section 23 of the Internal Audit Agency Act 2003 (Act 658)," she said.

The Auditor-General, Mr Johnson Akuamoah Aseidu, said the fight against corruption was the collective responsibility of all stakeholders that must be carried out with diligence.

He, therefore, called on heads of public institutions to show a keen interest in what went on in their respective entities, especially in the areas of revenue, procurement and expenditure.

“Revenue continues to be the bedrock for the survival of nations, and if there is a better time to pay critical attention to government revenue collection and accounting, that time is, perhaps, overdue," the A-G said.

Mr Akuamoah Aseidu also entreated the Ministry of Finance to apply sanctions on public officers who were found to have mismanaged funds.

On the Public Accounts Committee (PAC) of Parliament, the A-G urged members of the committee to act on the recommendations of audit reports, instead of allowing auditees to respond to such observations at public hearings.

For his part, a member of the Council of State, Prof. Naa Daniel Bagah, who chaired the event, advised auditors to develop the right attitude as revenue professionals in the discharge of their responsibilities.

"You need to be more vigilant, watchful, keen, alert and do your work very well, without fear or favour," he added.