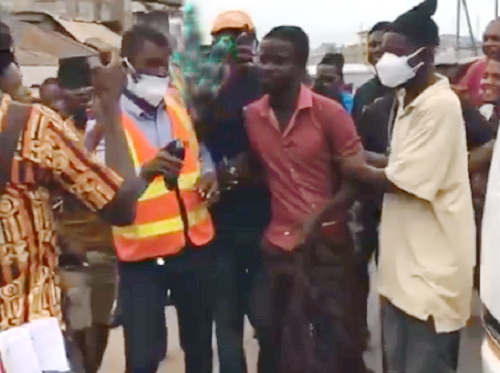 Benjamin Kofi Yeboah, the 35-year-old man suspected to have killed his mother and secretly buried her at Ayigbe Town, Dome Kwabenya in Accra, has been arrested.

His arrest came within minutes of the exhumation of the body of his mother, Madam Abraa Mansa, 86, whom he had allegedly buried in a shallow dugout with her head down and legs up. So shallow was the grave that sand had been spread over the legs to conceal them.

But for the intervention of the assemblyman for Ayigbe Town, Ebenezer Kwao, angry residents were bent on administering instant justice on the man they suspect has caused them so much anguish.

Officials from the National Disaster Management Organisation, municipal health authorities and police were able to exhume the body shortly before midday, and moments after the police pick-up carrying the body covered in a white body bag had driven away, there were shouts of ‘there he is, there he is’ a few’ blocks from the crime scene.

A boy had identified the suspect, dressed in a wine shirt over brown trousers, with his backpack in his hand. The alarm drew immediate attention for neighbours to round him up.

He was quickly sent to the custody of the Dome Kwabenya District Police Command at Taifa Bankyease.

Madam Mansa had been missing from home for a while, and Yeboah who lived with her, had been telling enquirers that she had travelled to Aflao, until calls to Aflao returned with denials. Yeboah subsequently fled the house.

An elder son of the old lady, Stephen Dollah who visited the house, chanced upon what he told the police could be the grave of her mother, following which the police obtained a court order to dig up the find, which turned out to be the decomposing body of Madam Abraa Mansa.