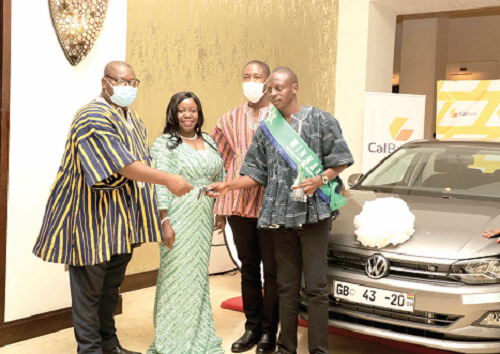 A 32-year-old community health nurse at the Kundungu Health Centre in the Upper West Region, Mr Surajdeen Haadi, has been crowned the 2020 National Best Nurse at the Ghana Registered Nurses and Midwives Association (GRNMA) 60th Anniversary dinner and awards night.

He has been practising his profession for nine years.

For his reward, Mr Haadi took home a brand new saloon car and a laptop computer.

A citation presented in his honour said Mr Haadi had become a household name in the Kundungu area because of his adherence to professional and work ethics, as well as respect for ethnic minorities.

“Your readiness to work in communities where an average nurse will ask questions, marvels your supervisors. Your record in Luggu, Naaha and the Yaala Health centres, as well as your present station where you work as an in-charge, are enough testimonies,” it stated.

It added: “Your community members say your approach alone, without medicine, brings healing to them. Your self- motivation sees you work day, night, weekends and during national holidays without complaining. As a result, your sub-district is ranked highest in TB case identification and indeed, all preventive healthcare indicators, including previously low-ranking Child Welfare Indicators.”

The event was held in Accra last Friday  to honour nurses and midwives who pulled outstanding performance this year, particularly during the heat of the COVID-19.

About 40 nurses and midwives from across the country were recognised for their contribution to healthcare delivery in their respective health facilities.

The occasion was also used to honour some past national executives of the GRNMA for the remarkable leadership qualities they exhibited during their tenure.

Additionally, the association paid tribute to all health workers who lost their lives as a results of the COVID-19 pandemic.

A nurse from the Western Region, Ms Juliana Owusu-Antwi, won the second prize, as well as the best nurse in her region while Ms Theresa Crentil settled for the third position and also took home the Best Central Regional Nurse award.

For their reward, GH₵40,000 was presented to Ms Owusu-Antwi while the second runner-up also received GH₵ 30,000, in addition to one laptop computer each.

Other nurses and midwives who received best regional awards for their respective regions were Madam Enam Ama Mensah from the Volta Region and Madam Mary Senya Vandampuya, the Greater Accra Region.

The President of the GRNMA, Mrs Perpetual Ofori-Ampofo, commended the winners for their contribution to the success and progress of the health sector.

“Tonight is a milestone in the life of the association and we are proud of ourselves that we have been able to uplift the image of our nursing and midwifery profession.

“Sixty years in the life of our union has not been that smooth, there have been ups and downs but we are grateful to God that we are here climaxing our 60 years of existence,” she added.

She said although 2020 had been an exceptional year, particularly with the spread of the COVID-19, the nurses and midwives across the country continued to perform their duties diligently to help mitigate the adverse impact.

She, therefore, assured the members that the association would continue to stand and fight for their welfare to ensure they were provided with better conditions of service.