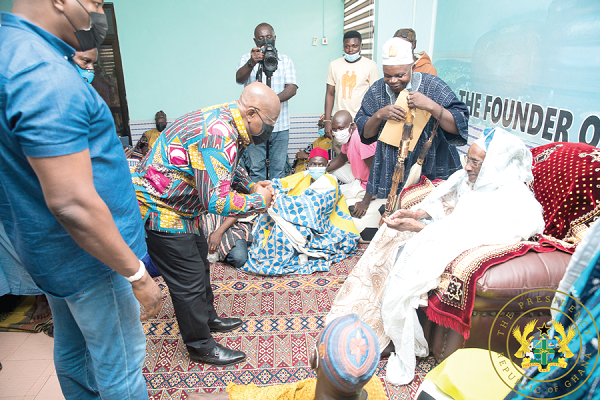 • President Akufo-Addo exchanging pleasantries with Tuntumba Boresa Sulemana Jakpa, the Overlord of Gonja, at his palace

President Nana Addo Dankwa Akufo-Addo has called on the people to remain steadfast and rally behind the government to deliver on its mandate of accelerating the development of the country.

He said for the government to succeed in its transformational drive, it required the support and contribution of all.

“With the support of the public, programmes we have put on the table will be implemented to enhance the welfare of everyone. There will be a watershed moment in the development of the country in my era.

“Support us in pushing the country down the path for which we were elected  and which we are carrying out today,” the President added.

He made the call in Damongo, the Savannah Regional capital, where he addressed the chiefs and people as part of his two-day tour of the region yesterday.

President Akufo-Addo said for the rest of his tenure in office, the government’s main agenda would be to consolidate all the gains it had made in the various sectors of the economy to improve on the living standards of the people.

“I set for myself two main tasks when I assumed office — improve on the governance of our nation to enhance and deepen the practice of democracy and also transform lives of ordinary people in the country,” he said.

According to the President, the various infrastructural facilities springing up across the six new regions the government created meant that the rationale for their creation — becoming instruments for accelerated development —  was being met, adding “apart from bringing governance close to the people, the other reason was also to bring development to those areas”.

Explaining the seeming delay in the appointment of some key officials of the government, the President said it was due to the diligence being followed in the appointing process.

“The government machinery is already in place and working. Many appointments have been made and by the end of my first six months, all appointments would be effected,” he assured.

While commending the chiefs and people of the region for renewing his mandate in the 2020 general election, President Akufo-Addo expressed satisfaction with the pace of development  in the new region so far.

He promised the people that work on the Damongo water project, for which he cut the sod last year, would commence soon as the contractor was mobilising to move to site next month after delays due to the outbreak of COVID-19 last year.

“During my first term in office, my government constructed 1200 kilometres of asphalt roads across the country, including the Savannah Region.

“In my last term, the target is 1500 kilometres and the region will again benefit from it,” the President added.

He also inaugurated an  Accident and Emergency Hospital at Buipe in the Central Gonja District.

The €89-million facility is expected to serve the people of Kintampo, Damongo, Fufulso, Sawla-Kalba and other surrounding communities.

The President also paid a courtesy call on the Paramount Chief of the Buipe Traditional Area, Buipewura Abdulai Jinapor II.

He is also expected to visit the East Gonja Municipality, the North East Gonja District and pay a courtesy call on the Kpembewura, after which he will inspect the progress of work on roads in the Salaga town, including the Bunjai-Fufulso road and the Salaga water project.

The President will later inaugurate the Salaga Astroturf project.

The Overlord of the Gonja Traditional Area, Yagbonwura Tuntumba Boresa Sulemana Jakpa, in a speech read on his behalf, thanked the President for initiating numerous projects in the region to improve the lives of the people.

He, however, appealed for the establishment of tertiary institutions and other educational facilities in the region.