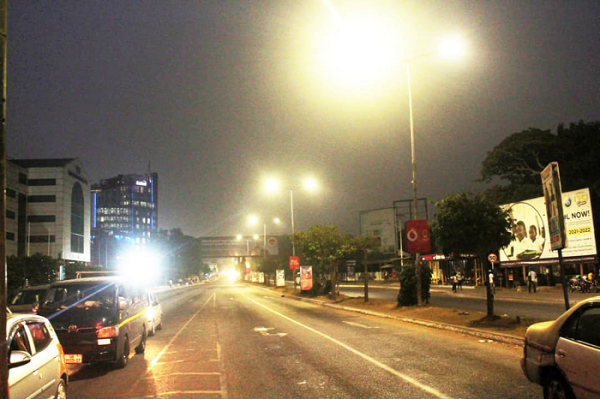 Installation of 14,287 energy-efficient street lights on 146 roads in 20 metropolitan, municipal and district assemblies (MMDAs) in the Greater Accra and Eastern regions is expected to be completed by April this year, the Millennium Development Authority (MiDA) has said.

The project will help illuminate 523.68 kilometres (km) of roads and streets in the selected areas with durable street lighting.

The $13.17 million project is being funded by the Millennium Challenge Corporation (MCC), a United States Government Agency, under the Ghana Power Compact II Programme signed between the governments of the US and Ghana.

The Project Manager, Energy Efficiency and Demand Side Management Project of MiDA, Mr Sylvester Ashong Ayayee, told the Daily Graphic that the project, which commenced in August, was rolled out in two tranches.

The first tranche, covering 177.76km of street lighting of either upgrading existing ones or fitting new installations, he said, had been completed, while the second tranche, currently ongoing, was scheduled to be completed within the next two months.

Work on the second tranche covers 345.92km of streets, including the GIMPA by-pass, notorious in recent times for robbery incidents.
Intended impact

Street lighting, he said, had been observed to be a major problem in Ghana, with a number of the street lights not working, while those working were using high-pressure sodium bulbs which consumed a lot of electricity.

“So by this project, we want to reduce heat load, as well as improve the system reserve margin,” he said.

Mr Ayayee explained that the street light project would reduce electricity consumption from street lighting by 40 per cent and reduce the cost burden on the beneficiary assemblies.

He said drivers, pedestrians and other users would be safer under the brightly lit roads at night.

“Street lighting is an essential road furniture. It ensures security at night for road users, contributes to improved road safety and enhances our quality of life and standard of living,” he said.

Well-lit streets, he said, had the potential to boost investments to aid economic growth and reduce poverty.

Mr Ayayee further explained that while the MiDA was bearing the cost of the installations of the street lights, the cost of maintenance and repair works would be borne by the various beneficiary MMDAs.

“The moment the project is finished and inaugurated, we will hand over operations and maintenance to the assemblies, according to the street lighting policy,” he said.

Ahead of preparations to hand over the project to the beneficiary assemblies, officials of the MiDA and the three project contractors, namely Elsewedy Electric T&D, Prefos Limited and Process and Plant Automation Limited, have joined representatives of the assemblies to inspect work done so far.