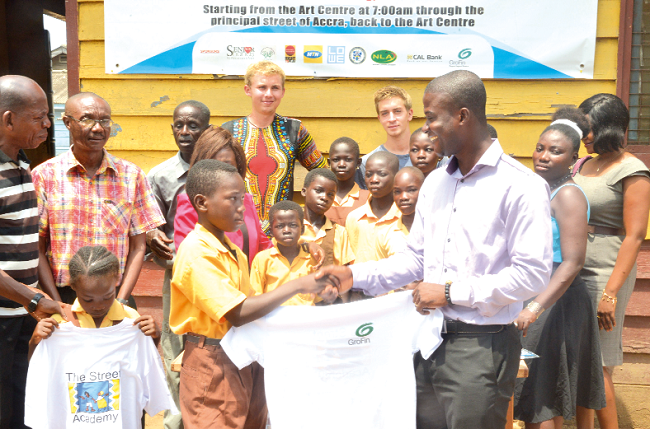 Mr Abraham Mensa-Belley presenting shirts to one of the children of the academy
30.5k Shares

Showing care to needy children can make them feel part of the society. In Ghana, some children hit the streets as a result of broken homes, verbal, physical and sexual abuse, neglect and poverty and loss of parents.

Without help from any recognised organisation, these children are trapped in a cycle of poverty and neglect. They lack basic necessities such as food, education, health care and a safe place to stay, thus exposing them to dangerous lifestyles.

The Street Academy, a non-governmental organisation, provides the basic necessities of shelter, food and clothing to such children and also gives them formal education and provides health care for them.

The walk, dubbed "Securing a healthy environment" and intended to create awareness of the repercussions of streetism and benefits of healthy lifestyles, took participants through some principal streets of Accra.

The Director of the Academy, Ataa Lartey, said considering that children predominantly suffered from ailments due to poor sanitation and unhygienic conditions, awareness of environmental cleanliness had become necessary, since quite a large population in the city lived in areas that lacked proper sanitary facilities, especially toilets.

He said most diseases such as cholera and malaria could be prevented, if human excreta was disposed of properly and people were encouraged to wash their hands regularly.

He expressed the hope that the walk would inspire a new sense of responsibility regarding hygiene and care for the environment.

The Investment Manager of Grofin Ghana Limited, Mr Abraham Mensa-Belley, presented the items to the academy and expressed optimism that the walk would inculcate healthy lifestyles in children.