‘Stick to observance of fishing closed season in Aug’ 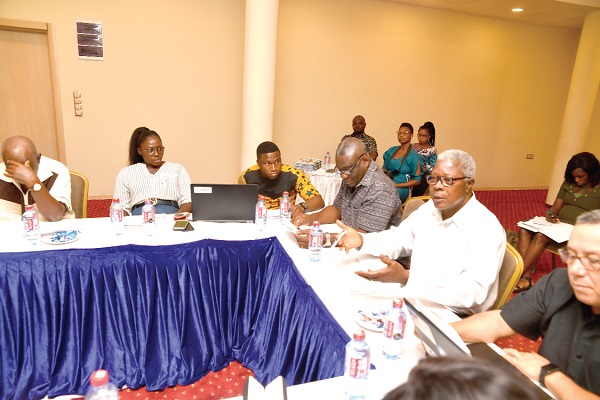 The Scientific and Technical Working Group (STWG) of the fisheries sector has emphasised the need for the government to stick to the observance of the closed season fishing in the month of August.

According to the group, the month of August was the peak period for fish to breed and produce more to address the dwindling stock of fish in the nation’s marine waters.

It said observing the closed season at the right time and banning all illegal activities in the fishing sector would help end the over-exploitation of marine resources and also address the declining fish stock.

The STWG was formed as an ad hoc committee in 2015 as part of the implementation of the Sustainable Fisheries Management Project (SFMP) to provide science-based management advice to ensure long-term sustainability of fish stocks.

The SFMP is a United States Agency for International Development (USAID)-funded project which is aimed at eradicating poverty and hunger globally.


Addressing the media on the sidelines of the STWG’s annual meeting in Accra yesterday, its Chairman, Professor Kobina Yankson, said the country needed to take the closed season seriously by implementing it appropriately, as there was a continuous decline in fish stock.

Although the group had earlier suggested to the government to enforce the closed season fishing in August, it was rather implemented in May and June 2019, which the chairman said was not appropriate to achieve the needed result.

“The active breeding period for fish is July, August and September. However, August is the peak period which is most appropriate for the closed season to enable the fish to produce more. Observing the closed season in any other month will not yield the needed result,” Prof. Yankson added.

Ahead of the closed season in 2019, a fish stock assessment report by the Fisheries Commission, an agency of the Ministry of Fisheries and Aquaculture Development (MoFAD), showed continuous decline in fish stock levels and sizes of fish due to over-exploitation of the sea through illegal, unregulated and unreported fishing activities.

In that year, when the MoFAD attempted to close the season between August 7 and September 4, it was opposed by some fisher folk due to the lack of extensive engagement with all stakeholders.

Prof. Yankson recommended that the disagreement between the government and fisher folk over the closed season could be resolved through effective and efficient engagement.

“The fisher folk need the government to engage them well, give a longer period of notices, so that they can prepare towards the season. They also need to understand, among other things, the benefits of the closed season and the time to see the result of the practice,” he said.

Additionally, he said, there was the need to ban all illegal activities in the fishing sector, including lighting, the use of unapproved fishing nets and ‘Saiko’ fishing, a practice where fishing trawlers are used to catch small fish.

A researcher, Dr Evans Kwasi Arizi, said a research he conducted showed that the longer period of closed season resulted in a higher population growth rate of fish.

He said countries such as Morocco and The Philippines had used the closed season to revamp their fishing industry, adding that “seasonal closure is good for recovering depleted stock”.