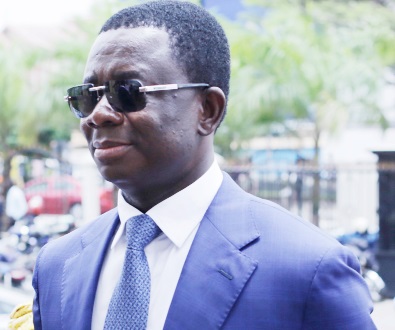 The Director of Public Prosecutions, Yvonne Attakora Obuobisa, has challenged the testimony by the second farmer who defended a former Chief Executive Officer of the Ghana Cocoa Board (COCOBOD), Dr Stephen Kwabena Opuni, who is standing trial for allegedly causing financial loss of more than GH¢271 million to the state.

The witness, Amo Amankwaa, had told the court that the fertiliser at the centre of the trial increased his cocoa yields at his farm at Biadan during the 2013/14 cocoa season.

He further gave the name of the cocoa purchasing clerk he dealt with during the season as Nana Yeboah.

However, Mrs Obuobisa — who was cross-examining the witness — said checks at the COCOBOD revealed that the purchasing clerk at Biadan was Peter Owusu and has been at post from 2012 to date.

In response, the witness said “the name the cocoa clerk gave me is Nana Yeboah, and whenever I go there I call him Nana”.

Mrs Obuobisa again questioned the witness on some missing pages from his passbook — the book which contains records of all cocoa beans harvested and sold by cocoa farmers.

The witness told the court that he told the purchasing clerk to tear four pages of the passbook because he had made “a lot of mistakes”.

However, Mrs Obuobisa suggested that the passbook was subject to the witness’ manipulation “because you can tear out, direct pages to be torn out and also make insertions like you did on some pages.

“Even the receipts you brought at the last adjourned date, which were rejected, were in no way related to the passbook,” she said.

The witness explained to the court that he always asked the purchasing clerk to write the name of the fertiliser, adding that he had receipts bearing the quantity of cocoa beans, but was rejected by the court.

The witness had earlier testified under the cross-examination of counsel for one of the accused persons that lithovit liquid fertiliser was very good, describing it as their “saviour”.

Again, he emphasised that no farmer drank the fertliser as claimed by a prosecution witness.

State prosecutors have accused the two of causing a financial loss of more than GH¢271 million to the state in a series of transactions involving the said fertiliser.

Dr Opuni and Agongo have pleaded not guilty to the charges and are on self-recognisance bail in the sum of GH¢300,000 each.