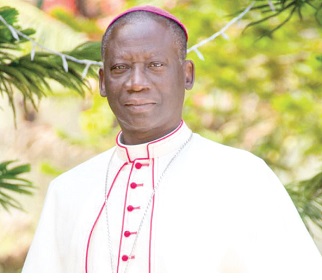 The Ghana Catholic Bishops’ Conference (GCBC) has described as unacceptable the level of corruption in the country, and called on Ghanaians to stand up and to defend the cause of justice, probity and accountability.

“Our interactions reveal that Ghanaians are getting angry, frustrated and disappointed. This anger is growing and is expressed through booing at government officials, demonstrations, open insults, etc. An urgent action must be taken to douse the anger and frustration of the people,” it said.

The conference also urged the government to set example in burden-sharing by cutting down on economic cost through the reduction in the size of government and leadership in state-owned enterprises.

“One strong signal that will indicate leadership and commitment to burden-sharing is by reducing the size of presidential and ministerial convoys,” it said in a communique signed by its newly-elected President, Most Rev. Matthew Kwasi Gyamfi, Catholic Bishop of Sunyani, and issued at the end of the conference’s Annual Plenary Assembly held at Donkorkrom in the Eastern Region from November 4 to 12, 2022.

The Annual Plenary Assembly was held on the theme: "For a Synodal Church: Communion, Participation and Mission in the Light of the New Evangelisation in Ghana".

It said another concern was illegal mining or galamsey activities and their devastating effect on the environment.

“The experts have said that the widespread destruction of our forest cover does not only lead to emissions of greenhouse gases but also reduces the forests' ability to remove carbon dioxide from the atmosphere, hence contributing to climate change,” it said.

It urged the relevant agencies responsible for the protection and preservation of the natural resources to ensure the prosecution of the financiers of activities that result in major crisis facing the country such as illegal mining.

The communique expressed regret that partisan politics had made it difficult for Ghanaians to speak with one voice and come together for the sake of the common good.

“Because of unhealthy partisan politics, one's commitment to the nation and the Church is mostly sacrificed for the interests of one's party,” it said.

The communique called on the two major political parties, the New Patriotic Party (NPP) and the National Democratic Congress (NDC), to accept the fact that neither of them alone had the solutions to the country’s economic challenges.

“That is why both have resorted to the International Monetary Fund (IMF) and the World Bank for support over the years. This is a clear indication that we have to come together as one people and collectively look for a permanent solution to our challenges,” it said.

It called on the government to intensify the stakeholder engagements that should be all-inclusive and non-partisan.

The communique said through those broader consultations, the country would develop a more robust economic policy and ensure its implementation.

That, it said, had become necessary because the country never got its economic fundamentals right, making the nation resort to the IMF and the World Bank for economic bailouts with little or no sign of improvement.

It recalled that in last year’s communique issued in Wa, the conference catalogued a number of challenges that confronted the nation.

“A year on, we are sad to note that the situation has worsened. The numerous challenges persist. These challenges include: high cost of living, high inflation, youth unemployment, bribery, corruption, greed, selfishness, lack of patriotism, poverty, deplorable roads, carnage on our roads, armed robbery, murder and other crimes, galamsey, weak and ineffective institutions of governance, abandoned and unfinished government projects, the culture of impunity, examination malpractices, violence, intimidation, attack on media men and media women, human trafficking and abductions,” it noted.

Those challenges, in addition to the current global crisis, it said, had contributed to the current socio-economic situation, stressing that the economic hardships were becoming unbearable for Ghanaians.